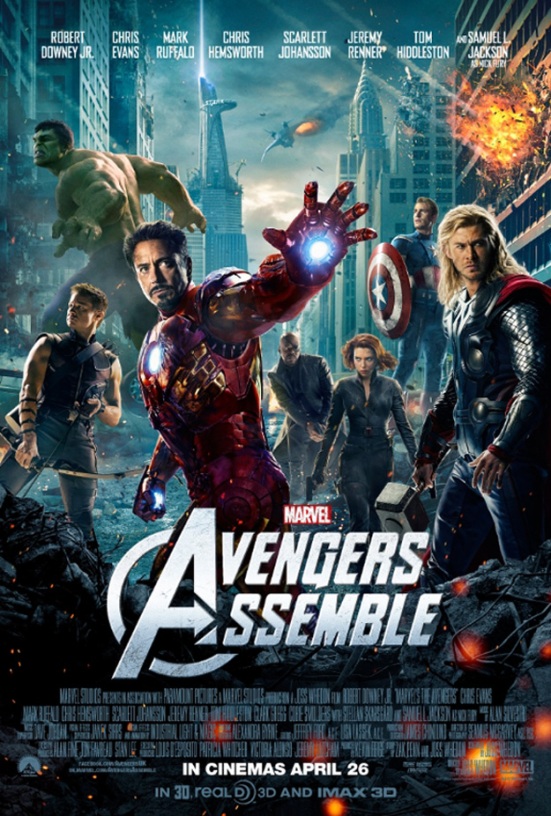 When we’re on the cusp of 2013, I’m confident I’ll be able to look back at the last 365 days and proclaim 2012 as the year I transformed into a dyed-in-the-wool Joss Whedon fan.

Truthfully, I’ve always admired the guy. I like Firefly. I like Serenity, flaws and all. But I’ve never really been a die-hard fan of all things Whedon. Remember that essay I wrote about Quentin Tarantino? My feelings on Whedon are roughly equivalent, if you boil away the particulars of their interests and proclivities as artists; for every Whedon work I like, there’s another I can live without. I don’t much care for either Buffy or Angel, and while I realize that it’s blasphemous to find value in neither, I’m not going to convert to Whedonism because everyone else thinks I should.

Yet in the last month, I’ve been forced to reevaluate how I feel about Whedon’s body of work. Two reasons: Cabin in the Woods, and– most of all– The Avengers. The former only counts for partial credit; Whedon just co-wrote it with Drew Goddard, whose contributions at the helm really feel like the essential binding that ties the whole film together. But the latter, well, that’s all Whedon flexing his muscles as a writer and a director. And as it turns out, that one film is all Whedon really needed to get me off the proverbial fence.

I’ll direct those curious about the broader span of what I liked so much about The Avengers here; I’m going into slightly more (and simultaneously less) detail with this essay, because that’s just the logical thing to do when a movie completely changes your perspective on a filmmaker and refreshes your tolerance for an entire genre. Which is exactly what that display of superheroic revelry did for me after the last few years very nearly burned me out on such fare permanently. For me, The Avengers felt like a tonic, or more accurately the hair of the dog that bit me– the film represents everything about superheroes that’s been wearing thin on me, but done joyfully, unabashedly right. And so I find myself cured. Voilà.

I’m not really overstating myself here, either. Not that there haven’t been exceptional superhero movies since “superhero movie” became a genre, but recently they’ve started to feel like chores to me, items on a checklist that I’ll go through the motions for just so I can cross them off and move on. Up until the end of April, I just plain felt exhausted by people with powers and costumes and hang-ups, and I think that’s understandable; we’ve been saturated with tons of superhero productions, ranging from good, to great, to mediocre, to miserable, for over a decade as property upon property has been adapted and sequelized in light of the realization that comic book properties can turn a major buck for studios in need of a tentpole.

That’s simple enough: I did. Remember that Buffy— the property that put me off Whedon in the first place– debuted in 1997, my final year in middle school. My likes and dislikes now aren’t completely different from what they were then, but everything about Whedon’s habits as a writer and a showrunner irked my 13-year-old self. His dialogue is highly stylized, his writing hops from genre to genre and swaps tones constantly, and his tendency to just riff on established tropes and ideas just didn’t work for me; suffice it to say I never paid the membership fee necessary to become a card-carrying member of the Whedon army.

Time can do wonders for a person’s palette, though, and so here I am today. I love stylized dialogue as much as naturalistic dialogue, I think it’s perfectly acceptable for movies and TV shows to mix it up and be serious and funny at the same time, and genre riffs can be wonderful when they’re done with intelligence and an underlying passion for the genre in question. I can’t help but think about how differently I’d view every year from, say, 2000 until now– there are tons of movies that fit those descriptions, and more that overlap each other. Without that change in perspective, I’d probably be as opposed to Juno and Kick-Ass and maybe even the Hellboy movies and countless others. (And I’d probably be a much bigger fan of The Dark Knight.)

Fun as it is to ponder what might have been, though, the real thrust of my anecdotal yarn lies in how that the passage of over a dozen years has seen me become somebody capable of appreciating what Whedon does. I “get” him now. And I think The Avengers may encapsulate his innumerable talents in the most economic package possible (in the sense that it takes less time to watch The Avengers than it does to watch the span of Buffy or Angel*). 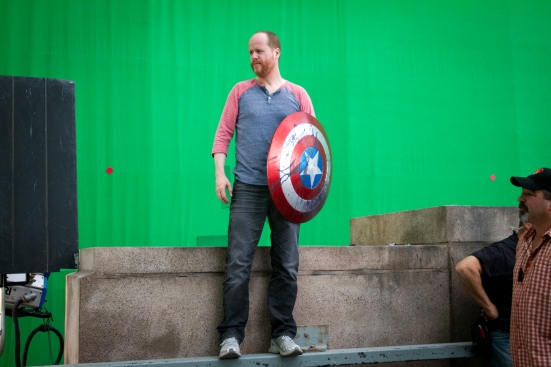 So in short, it’s to The Avengers that I owe thanks for my newfound Whedon fandom. Maybe better than any other director of Marvel’s franchises– save for possibly John Favreau, though I tend to think that his work on the first Iron Man film very much resembles lightning in a bottle– Whedon understands the types of characters on display and how best to make them sing. Tony Stark, Steve Rogers, Natasha Romanoff, and Bruce Banner all feel like Whedon creations, even though he can’t claim any involvement in their births whatsoever; maybe it’s luck, or maybe it’s fate, but most likely it’s just a matter of Joss bearing an implicit understanding who these people are and where they come from.

Stark makes the best example in this case just by virtue of his nature and attitude– snarky quipping and detached, isolated heroism, hallmarks of the man, fall well into Whedon’s wheelhouse as a writer. Tony’s the kind of person one could easily see taking over the entire film and becoming its central figure, but Whedon pulls off something of a miracle in that regard by a) allowing Tony to be Tony– e.g., letting him be the narcissistic scene-stealer we know him as–and b) never giving him the opportunity to walk away with the film.

That’s no small feat. Iron Man, the character, is probably the most popular out of the bunch speaking to mainstream appeal, and Robert Downey Jr. is certainly the most popular leading Marvel man. But he meshes here. He gels. He coalesces into the group rather than standing out and taking all of the glory.

There’s a two-pronged reason for that. Ask anybody what Whedon does best, and the most frequent response will be “work in group settings”. Whedon’s known as something of a whiz when it comes to keeping a large stable of characters well-balanced, and he brings to The Avengers that very same deft hand at maintaining the identity of the individual while figuring out precisely where they fit into a team’s dynamic. The second prong, of course, is the casting prong. Downey may be great, but he’s also surrounded by a bunch of other actors who are at least as great (and in some ways maybe greater). So Downey gets kept in check along with everyone else; no one really steps out to siphon all of the attention and interest away from their fellow cast members.

Which lets minor types– notably Romanoff and Banner– really pull through and prove their worth as standout characters operating within the confines of the team. If there’s any one point of consensus among Avengers fans regarding the film’s best element, I’d be willing to state point-blank that it’s the Hulk; largely argued that his success as a character stems from his placement in a roster rather than in a standalone narrative, the real crux of his triumph here comes from how well Whedon writes him and how well Ruffalo plays him. 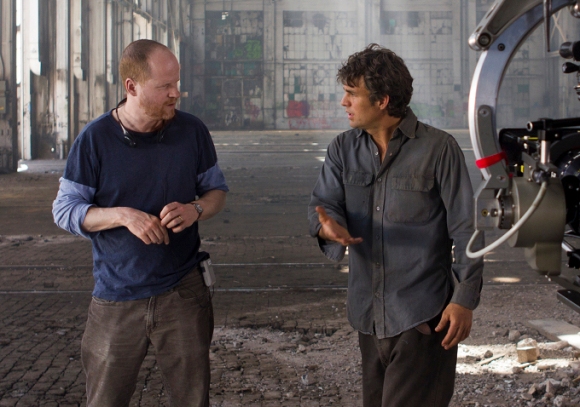 I could go on– and on and on and on– about all of the individual character details that make The Avengers so great, but delving into the specifics actually glosses over the real point. It’s all about character. Think of The Avengers as a movie about character and action which desperately needs to meld those two halves together, and then Whedon’s efforts in the realm of the former become even more important. Whedon invests us in his characters early, quickly, and unilaterally, and so when we finally come to the film’s big climactic action scene, everything counts because we’ve come to care for and empathize with each of these heroes on personal levels unique to each as well as on a more macro level.

To me, that’s nothing short of masterful. Blockbusters by and large are frequently treated as nothing more than big, dumb, disposable entertainment meant to be seen in a theater and forgotten (until the Blu-Ray comes out!); The Avengers may be big, loud, bright, shiny, and foolishly optimistic in its own way, but it’s by no means some chop-shop hack job stitched together in an editing bay with nothing but dollar signs motivating the process**. And a lot of that has to do with Whedon– the way he perceives his characters, the way he relates each character to one another, setting them apart both physically and emotionally before bringing them together on both of those two planes, and the way that he stages his action. Everyone gets their moment; everyone gets to play to their strengths. Captain America leads. Thor and Iron Man take to the skies. Black Widow and Hawkeye manage the chaos on the ground, picking off foes as they lead civilians out of harm’s way. Hulk smashes, generally creating mayhem with every leap he makes and every punch he throws. It’s grand stuff that’s unabashedly fun, intelligently fun, and never repetitive or stale for a moment.

But it all matters because we care. If that sounds cloying and maybe kind of saccharine, well, I don’t know what to tell you other than everything you come to like in film, you like because you care for one reason or another. The Avengers may be the colossal blockbuster behemoth of 2012, but it’s a superbly made colossal blockbuster behemoth, and while you may place credit in any number of places– the cast for their great efforts in realizing each of their characters beautifully, or the Marvel suits and idea people for getting this whole crazy Avengers shindig rolling 4 years ago without having any idea it would end up snowballing into something this huge– but I know I have to give nothing but massive respect and props to Joss Whedon, the man at the helm of this superhero carnival.

This is what it looks like when a part-time (wannabe) film critic, full-time film lover, eats crow willingly and alters their stance on a talent. Take a long glance. I’ll be diving into Whedon’s other works when time allows, and I may even make a thing out of it over here at A Constant Visual Feast— that just seems appropriate. But in the meantime, I’ll take The Avengers gladly.

*Both of which I plan to go back to and watch for myself.
**I realize this movie has made a hoozamajillion dollars, and that money is of course a factor in its birth. But I think it’s disingenuous to look at the film as nothing more than a cheap cash grab. Yes, I’m allowed to pick and choose what I believe constitutes a “cheap cash grab”.

11 thoughts on “Joss Whedon Is My Master Now”