The Avengers didn’t have to do much to impress me. Being as honest as possible, Joss Whedon’s attempt at making a respectable entrance into the 2012 summer season with the capstone picture of Marvel Studios’ long-gestating superhero bonanza just needed to be tolerable to get a pass from me. Put bluntly, C-level material alone would have been a treat. So imagine my surprise that The Avengers, against all my jaded anxieties, happens to be better than serviceable; in point of fact, it’s  pretty incredible, an exhilarating, eye-popping, and exhausting time at the movies and one of the most well-done blockbusters in recent memory. There’s nothing better than relinquishing one’s cynicism for unabashedly optimistic and joyful mayhem.

What The Avengers is not, however, is singular– treat this as a standalone film and you may be lost, but bring along a Marvel guide and you’ll thrill at Whedon’s creation as much as the next guy. You could also watch the five Marvel films leading into The Avengers‘ events (a truly radical idea), but the idea here is simple: take the main protagonists and supporting heroes from each of those productions, put them on one side of a cosmic line in the sand,  place a world-threatening entity on the other side, and see what happens.

The lucky winner of the latter role? Tom Hiddleston, reprising his role as Loki from 2010’s Thor; he’s jilted, he’s angry, he’s power-hungry, and he has an army (the Chitauri) at his disposal to wreak vengeance on Earth before installing himself as ruler supreme. Enter the Avengers, stage right– Iron Man/Tony Stark (Robert Downey Jr.), Captain America/Steve Rogers (Chris Evans), Thor (Chris Hemsworth), Bruce Banner/the Incredible Hulk (Mark Ruffalo, playing the third iteration of the character), and regular humans Hawkeye/Clint Barton (Jeremy Renner), Black Widow/Natasha Romanov (an on-fire Scarlet Johansson), S.H.I.E.L.D. director Nick Fury (Samuel L. Jackson), and his two top agents, Maria Hill (How I Met Your Mother‘s Colbie Smulders) and the beloved Phil Coulson (Clark Gregg). Of course, everything isn’t so simple as all that. Teams have to work together, after all, so when you take a handful of characters accustomed to headlining their own films– and fill in the cracks in the concrete with secondary good guys who, lacking extraordinary powers, content themselves hovering at the upper echelons of martial prowess– you’re bound to see some fireworks.

The Avengers builds to a climax that begins aboard a gargantuan airship and ends in the streets and on the skyline of Manhattan, but leading up to that there’s in-fighting, squabbling, discord, and snappy banter to spare; the film itself is something of an origin story, telling the tale of how Earth’s mightiest heroes learn to work together and repel an intergalactic invasion as one. Which leaves little room for greater emphasis on the individuals. No doubt some may find that off-putting, but The Avengers has Whedon in its corner, and few people in the business understand how to make a group function on-screen better than he does.

If we never get in-depth exploration of each superhero involved in the production, we still come away with the necessities and more; maybe the best thing Whedon does with his cast is allow their baggage and hang-ups to resonate throughout the over-arching narrative, thereby allocating time to all of them without letting any one character truly dominate the screen. Marvel’s always been more oriented on characters before ideas anyways, and here the focus is taken off of the one and applied instead to how the many interact and gel with one another. This isn’t an Iron Man film or a Hulk film; it’s The Avengers. Dedicated character studies need not apply. 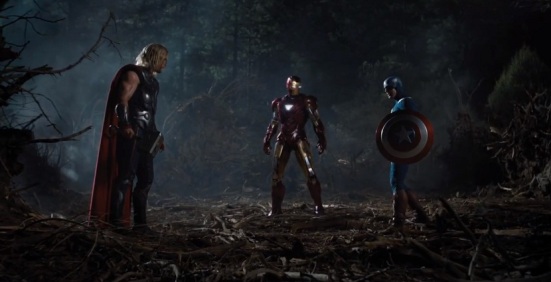 The Avengers smashes, crashes, busts, booms, burns, crushes, and zaps its way through a last act purely devoted to havoc for the purposes of inviting superheroics, but that character work might be the movie’s best attribute. Of course, Whedon’s efforts with his cast yield material that’s so good that The Avengers suffers in the first twenty minutes or so, when none of these figures are on the same stage. There are other issues, too; the take-off, as a general rule, is bumpy and somewhat rote. The goal, of course, is to get the principals in the same location, and The Avengers struggles in this endeavor, littering the way with some wonderful moments (particularly the reintroduction of Bruce Banner) before finally taking off.

The ascent is remarkable. Anyone hostile toward the machinations of Whedon will likely find the resultant dramatics to be unbearable, and after collecting his players together the Buffy showrunner does what he does best: play characters off of one another. Often, their interplay springs from dialogue, but nearly as frequently their frank exchanges of ideas are translated into fight scenes; Whedon’s gleefully satisfying his curiosity over who among these characters would win in a slugfest, cleverly sating our own in turn.

But none of the hallmarks typical of Whedon’s proclivities as a director truly prepare us for the scope and span of the action he orchestrates in the second and third acts. Frankly, the two big aforementioned set-pieces here very nearly bleed into one another to the point of becoming indistinguishable. This isn’t a criticism, of course, but rather a testament to the dizzying heights of spectacle The Avengers carries us to; the in-between moments don’t feel like a barrier separating a pair of large-scale FX-heavy battle sequences as much as necessary breathing room. The Avengers anchors itself to the ground and launches us through the air in its last half hour, ending on a protracted, ceaselessly varied “bang” of a note; it’s almost impossible not to be gratified by that climactic display.

And yet there’s something more underneath it all. The Avengers, through its surface, visible merits, seeks to remind us why we love superheroes and why we thrill at watching them defend the innocent and combat evil. That’s only natural, I think. Gathering together some of the most iconic comic book heroes from the page and the screen can only have that nostalgic effect. But the film points to that idea in more nuanced ways as well. The very concept of the Avenger Initiative feels as though it’s born in fan worship and upheld by tenets of belief in superheroism; it comes from faith, and the hope that a few gifted individuals can change the world.

Ultimately, then, The Avengers plays like one big celebration of the genre; however much you choose to read into the film, there’s no doubting that primary aim. For me, it arrives not a moment too soon. I’ve long been losing interest in comic book films, which with a few notable exceptions are growing into formulaic trash more often by the year. Maybe The Avengers won’t change that, but if nothing else, it’s proven to be a soaring, dazzling, and endlessly entertaining tonic of superhero adulation.