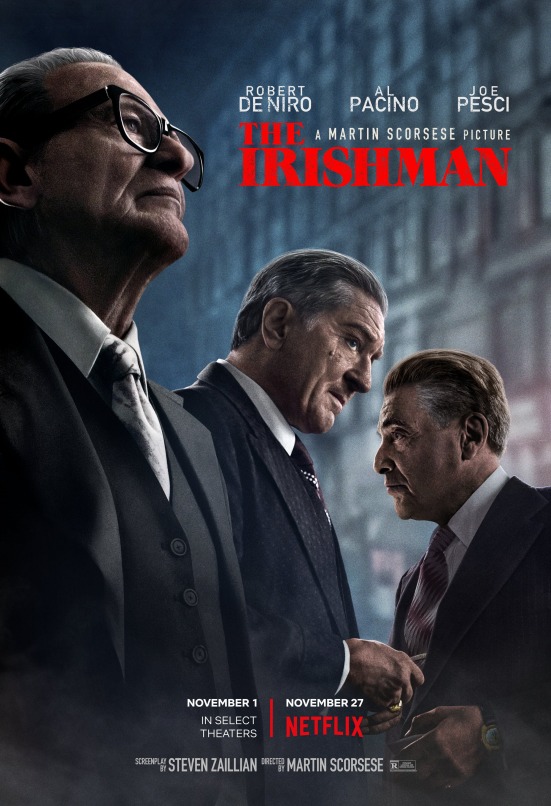 Let’s get one thing straight: The Irishman‘s movie poster looks like a poster for a much blander movie, a movie directed by someone other than Martin Scorsese, perhaps someone who has enough dirt on Joe Pesci to convince him to come out of retirement. Thankfully, The Irishman is not that movie, and Scorsese got Pesci to show up for the film because he’s Martin Scorsese, and when Martin Scorsese knocks on your door, you answer.

I admit to having reservations over this movie for the last half a million years I’ve been hearing about its production*; I didn’t think I needed another Scorsese gangster picture** in my life. As time passed and he went on a three-film tear with Hugo, The Wolf of Wall Street, and Silence, those reservations deepened, because what greater statement can he make about his vitality as a filmmaker than that? As it turns out: The Irishman. That’s a pretty good statement.

There’s been a tidal wave of pissing and moaning from the cheap seats, filled up with people who watched this movie and neither understood it nor understand Scorsese; frankly I’m not sure they understand movies as anything other than scorecards for keeping track of their performative wokeness. Screw those people; they’re idiots. Think of this review, released after The Irishman‘s Netflix premiere, as my way of putting the final punctuation mark on this conversation. This is a great film.

*Give or take
**Not that he’s directed more gangster pictures than literally every other kind of picture. Because he hasn’t. Seriously, count them up, sheesh.