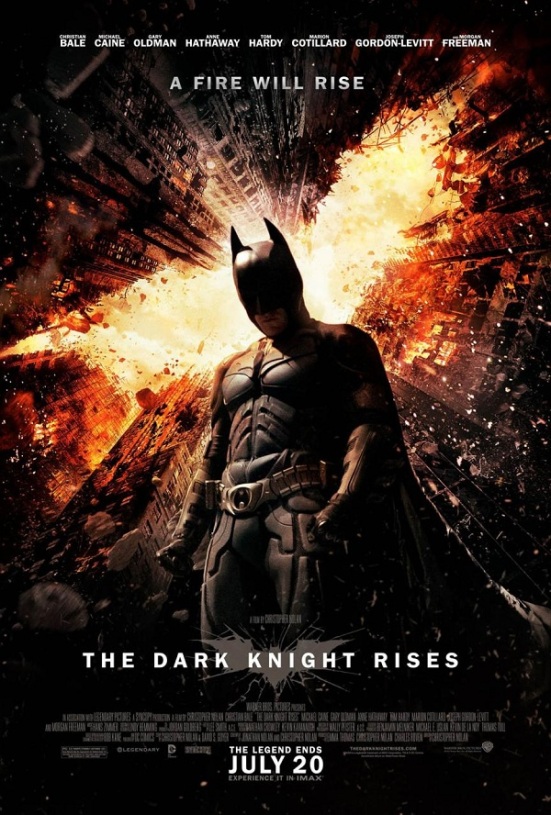 There’s no good starting place for discussion of The Dark Knight Rises. In addition to its individual girth– the film clocks in at a nice, round two hours and forty five minutes– TDKR represents Christopher Nolan’s final contribution to the Dark Knight’s rebooted franchise. Does the film stand as an acceptable farewell letter to both the bat and the man? The results are disappointingly mixed. Nolan has bid farewell to the caped crusader with a bloated, top-heavy, structurally unsound film, but one that delivers in the action department and offers some of the best performances from its regular cast to date. For summer popcorn fare you could do much worse, but this is Christopher Nolan; we’ve seen him yield far better results playing in this exact same sandbox.

Of course, the sandbox is much more crowded this time around, and on top of that things have gotten pretty dull around Gotham City  The Dark Knight‘s wake. Eight years have passed since the events of that film; in the interim, Batman and Bruce Wayne have both gone into hiding by pure coincidence, while the city government has passed the Dent Act, a nebulously defined piece of legislation responsible for depopulating Gotham’s streets of organized crime. Bruce always envisioned a world in which the Batman wouldn’t be necessary, and Nolan makes his wish a reality before super villainous storm clouds roll in and force the world’s greatest detective out of retirement.

Reaching not especially deep into the wonderful rogues’ gallery Batman enjoys on the page, our antagonist du film is Bane. We’ve actually seen this character before– Joel Schumacher employed him as a tertiary antagonist in 1997’s tragically awful Batman & Robin— but here the musclebound criminal is both filtered through Nolans’ lens and embodied by Tom Hardy. Like Heath Ledger’s anarchic Joker, Bane is a terrorist, but his ideology actually has direction and reason. Rises isn’t about chaos; it’s about inciting revolution. Most of us still remember 2011’s Occupy Wall Street movement, and while the youth protests and sit-ins of that phenomenon little resemble Bane’s brutal, cunning, unforgiving tactics, they’re both interested in the same thing: class inequality.

There’s a degree of folly in trying to pin down a comic book movie as a work of its time, particularly with political themes. Frequently, they work better when used to examine broader topics of heroism and humanity. But no rule exists forbidding the mixture  of deep-rooted and contemporary social issues into pulp-based mixtures superheroic stew. Taken at face value, The Dark Knight Rises stands out as a well-made bit of popcorn entertainment, a grandiose, operatic action film that should satisfy most audiences despite being somewhat overlong; going beneath the surface, the film is a product of its day and acts as a discourse on social revolution, a mash-up of big, weighty ideas and exceptional action sequences. In other words, it’s boilerplate Christopher Nolan.

But not all is well in Gotham this go-round. If Batman Begins and The Dark Knight have their share of flaws– and they do– The Dark Knight Rises easily stands out as the messiest movie of the bunch. Rises feels cacophonous, loud and brazen and brimming with ideas but utterly lacking the careful craftsmanship Nolan typically brings to his cinema so as to mesh each element of his pictures together. What’s most baffling about Nolan’s failure to sufficiently bind together Rises‘ thematic and dramatic drives is that all of the material needed to do so in the film exists; the failure lies entirely in his hands. The film ends up being disharmonious thanks to Nolan’s directorial proclivities.

Maybe that’s the downside of being one of today’s most cerebral filmmakers. Nolan tends to put his concepts before his plot, and tends to treat his stories as puzzles before narratives. A good brain-teaser can be loads of fun, but the problem Nolan runs into here is that he doesn’t have a good brain-teaser to throw at us. In fact, he cheats with the riddles he tells in Rises; the solutions undermine them, and therefore undermine the story that he’s telling. It’s one thing to lie to characters in your film, and another to lie to your audience. Nolan does both remorselessly, and that wouldn’t be so bad if his laziness didn’t also render the political overtones of Rises completely meaningless. In making a Batman film that plays more to the character’s comic book roots, Nolan has abandoned the intellectual flourishes that define the rest of his work– it’s big, dumb filmmaking from a much, much smarter filmmaker.

To the credit of Rises, not everything is so sloppily handled. In between the film’s baffling, repetitious structure and its hollow political sentiments, there lies some of the best acting in the series to date. Bale, more in command of both Batman and Bruce Wayne than he’s ever been, bounces off of a massive supporting cast, ranging from Anne Hathaway’s cat burglar, Selina Kyle (a foil of sorts to Wayne, though she faces her own ennui with sardonic delight and endless one-liners), to Michael Cain’s loyal, loving Alfred, to Hardy’s monstrous heavy, and more. Meanwhile, Joseph Gordon-Levitt has a triumphant introduction as an idealistic young buck on the police force whose optimism is tested against the harsh reality of enforcing law in Gotham, courtesy of Gary Oldman’s scarred and nearly obsolete Commissioner Gordon.

The big problem is that these actors all perform in the service of something muddled, but it’s impossible to deny their excellence. The Dark Knight Rises has a great film woven into its bones, and among its character portraits and exciting action set pieces there are numerous clear glimpses of what Nolan’s send-off to the franchise could have been. But Nolan loses control of his picture much too quickly and can’t reestablish his dominance here; Rises runs amok, and while the results may be entertaining, they’re slapdash and boorish. The subtext here is strong, but the connective tissue needed to make it matter proves weak.