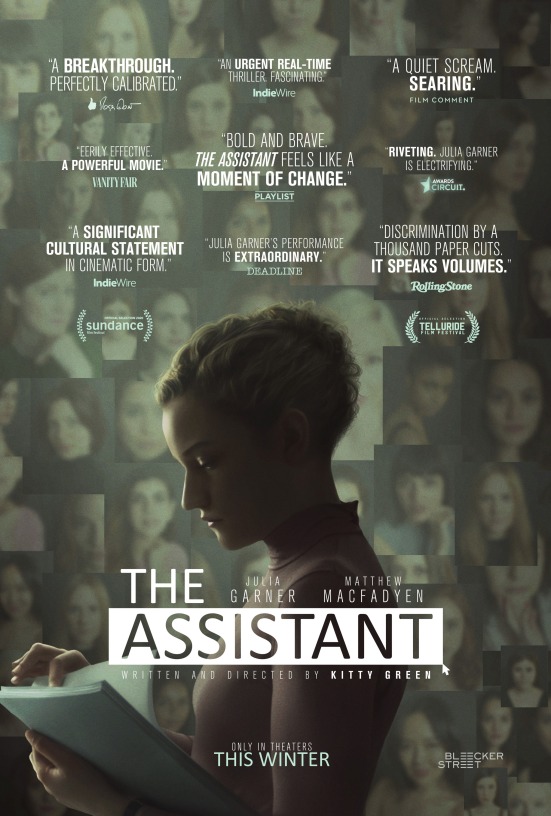 I have an interview with The Assistant‘s filmmaker, Kitty Green, coming up in the next couple of days, but for now, let me share with you the piece I wrote about the movie in time for its NY/LA release. Counter to how these things normally go, I’m really happy with it.

It’s nice walking away from a piece of art with a specific-to-you reaction to it; all the easier to make your opinion stand out in a sea of opinions*. Frankly: I’m aware men like the boss character here** exist, and I worry for my daughter’s safety in a world where those men have power. But I’m more worried that she’ll grow up and get caught in a job in a field that leaves her totally alone. Grant that I’m the dad, and I feel bad for the dad character here, who we only here from briefly on a belated birthday call, but also grant that no parent hopes for their child to mature to adulthood and wind up with nobody to confide in.

Anyways, now that that cheery paragraph is out of the way, you can read the piece over at Mic.com.

*Most opinions, especially professional opinions from professional film critics, are pretty tacky, but that doesn’t make it easier to stand out, much to my surprise.
**He’s a Harvey Weinstein analogue, sort of. It’s easy and maybe not strictly incorrect to think of this as “the Harvey Weinstein movie,” but this sort of thing happens in all kinds of industries, not just the movie industry, and there’s more than one Weinstein in the movie industry, too, so keep all that in mind, I’m beggin’ ya.