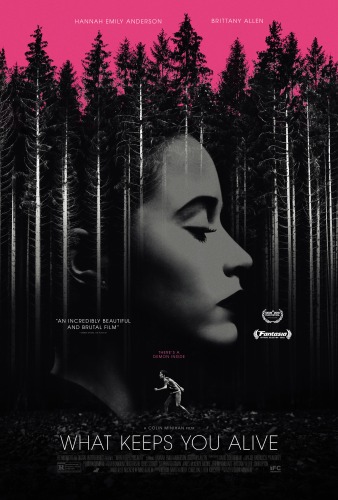 My rating system has needed work for a good long while; too often I feel like I’m giving films too high a score, and thus giving them a pass on their flaws, when I’m much more mixed on them than the numbers imply. So basically, take my low-ish score on What Keeps You Alive with a pinch of salt. Maybe. I think I nailed it.

First: The film’s fine. There’s plenty in here that Colin Minihan does that works to his advantage; as noted in the opener, I’m really happy to see him bait and switch the boring and shitty “slow burn thriller” formula by taking the audience off-kilter within the first 20 minutes. That’s terrific. I also love his filmmaking.

I don’t love his editing. This movie is screaming for cuts. A good, lean, 80 minute version of this film (give or take a minute or two) would do better justice to what Minihan’s trying to accomplish; as it stands it’s just a touch flabby, which kinda does a disservice to his shrewd subversion of that slow burn aesthetic.

Check it out if you like. I think this guy’s got some chops. (His cast rocks, too.) But also check out my full review for Paste Magazine. That’s your main takeaway here.