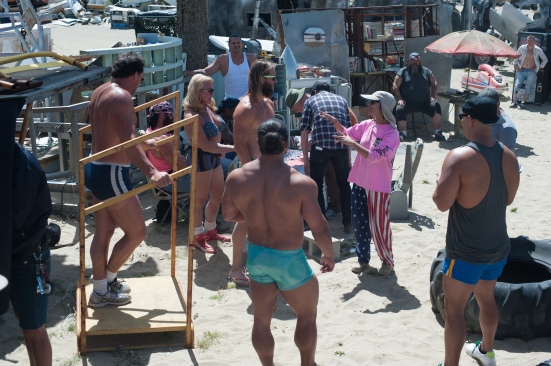 First: I got to interview Ana Lily Amirpour, director of 2014’s A Girl Walks Home Alone at Night and last Friday’s The Bad Batch, and if I had to describe the experience in a word, that word would be “awesome.” If I had to describe it in more words than that, I’d peg it as one of the most pleasurable interviews I’ve ever had the honor of conducting, which is saying a lot considering how many wonderful conversations I’ve had with wonderful people over the last five or so years. She’s a delight.

Here’s the long and short of what happened. A woman asked Amirpour the following during the Q&A session:

Was it a conscious decision to have all the black people have the most gruesome deaths on screen? And what was the message you were trying to convey with having this white woman kill a black mother in front of her child and then have her assume to be the mother figure for the little black girl?

Fair question. It’s hard to argue that the two characters in question don’t die the two worst deaths in a film where a handful of people die pretty awful deaths, and in the grand overarching question about representation in our media, this is a conversation worth having. Amirpour, however, needed the question to be repeated to her several times (pro tip: she’s 30% hard of hearing), and finally replied with, “I don’t make a film to tell you a message.”

A whole lot has happened since this screening. First, Amirpour zealots got on Twitter and attacked the woman who asked the question. Second, Amirpour herself and the questioner apparently got into an argument with one another, though as the questioner has made her Twitter account private, I can’t vouch for that in any capacity. Third, people decided to write hit pieces about Amirpour, whether in long form or 140 characters.

Fourth, I’m writing this down, because seriously: This is dumb.

Let’s first not discount the value of the question, and let’s second not make personal attacks on a woman of color asking that question acceptable. But let’s also acknowledge that a post-screening Q&A might not have been the best place to ask that question, for either the questioner or Amirpour (though let’s immediately grant that without that kind of access, the questioner would likely have never had the chance to ask at all). It isn’t a safe space. It puts the questioner in a vulnerable position and Amirpour in a vulnerable position, and two people discussing a hot topic like racism and racial representation in media in vulnerable states in an open venue is a textbook recipe for fomenting defensiveness. Put in the same spot as Amirpour, I’m not sure I’d do much better. I’m not sure most of her critics would, either.

I think criticizing Amirpour’s defensive reply is fair game, and I say that as a guy who really digs her work and finds her to be quite charming on a personal level (and also as a guy who is prone to defensive behavior). But I think cobbling together hatchet jobs on Amipour and The Bad Batch, or firing off Tweets characterizing her as a big ol’ racist (or hell, just disseminating Tweets of that nature) is grossly negligent at best and embarrassing at worst (or maybe the other way around). Do we seriously want to accept a narrative where Amirpour, a woman of Iranian descent, doesn’t know a thing or two about othering? Do we really think Amirpour actually considered what casting an actress like Yolanda Ross in a role that ends in her grisly death might mean in practice? (Do we actually believe that she cast the extra Jason Momoan ruthlessly butchers alive knowing what kind of message that might convey to her audience?)

Do we honestly feel that her response is a marker of prejudice and not something more logical, like, say, discomfort? If you were asked the same kind of question in the same kind of setting, can you really say you’d do much better?

It’s possible to critique without robbing a person of their humanity, and what’s happened in the case of Amirpour and The Bad Batch goes against that grain. There has to be middle ground. Racism, as a concept, is nuanced, layered, far more complex than most straightforward “analyses” of this particular contretemps allow; this is why Jordan Peele’s Get Out is one of the year’s most valuable films, because it approaches racism as layered, and reminds us that whenever we pat ourselves on the back and say, “Well, I’m not like that!”, we should maybe take a pause and think, “Wait…or am I?” You can ask Amirpour to do better without describing her using the same language you’d use to talk about, say, Jeff Sessions or David Duke (mostly because neither of them would look at Amirpour and consider her their equal). Or you can go around building false narratives about racism, which is frankly kinda dangerous. If everything is racist, nothing is racist. That’s the inevitable result of reactionary “criticism,” where no event is ever interpreted on a case by case basis.

It’s a shame to see Amirpour, one of the movies’ great up and coming female directors, so ruthlessly taken down by the same people asking us to advocate for Wonder Woman while also suggesting we ignore that film’s shortcomings. Maybe it’s easy to only embrace artists who pass the purity tests we know we’d fail if we took them ourselves (though damned if you can get a single white-kid film critic to say so). I guess this is my way of saying, “Go see The Bad Batch and make your mind up for yourself,” or perhaps, “Don’t let outrage over an artist’s real-world actions bleed into your take on their movies.” But really it’s just my way of saying, “Read my interview because it’s more interesting than the outrage takes,” which is objectively true.