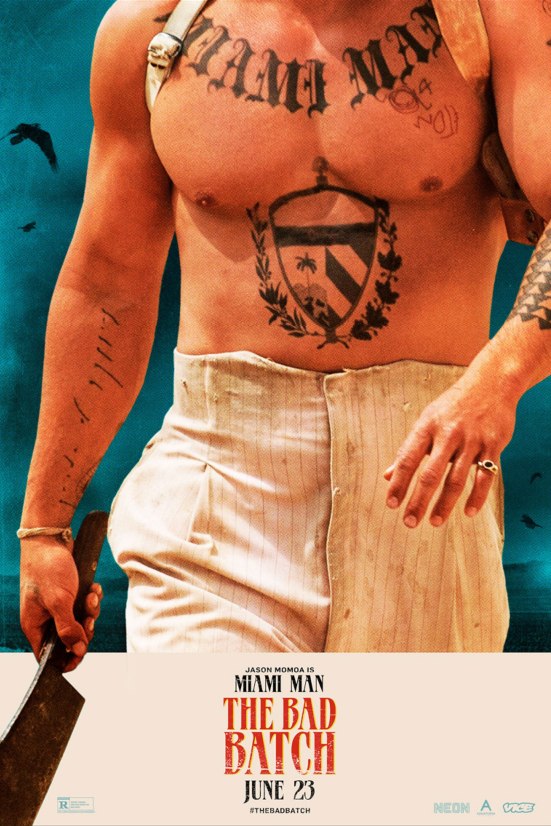 (What do any of these movies have in common with each other? Little and less, but maybe you can draw some links from one to the other to the third, especially between the first and the last in the round-up. Or maybe not. There’s not much that gooey indie dramedies, harsh crime stories, and acid-trip cannibal flicks have in common, other than the fact that I watched them, and really, that ought to be good enough for all of you, right?)

Cannibals in a wasteland: That’s where A Girl Walks Home Alone at Night director Ana Lily Amirpour is at on the topic of America. The allegory in her latest, The Bad Batch, is perhaps a tad on the nose; a film about Americans unceremoniously expelled from their nation’s borders and into the arid embrace of the Texan outback, where they immediately set about eating each other to survive, feels overly apropos as commentary on its current atmosphere of hyper-partisan nationalism. But obviousness is the least befuddling aspect of Amirpour’s work, an ambitious, sprawling achievement of surreal design where nothing feels connected at first because nothing about American life feels connected at ground level. The Bad Batch gives us an aerial view of humanity, pointing out the tangled web of systems that ensnare us all whether we like it or not, whether we realize it or not, whether we admit it or not. It’s messy, though astonishingly well-made, but then, maybe we shouldn’t expect a movie where cannibalism plays a central role to be clean. (***1/2.)

Evan Katz is a director fated to make movies about the poor decisions men make under duress, just as Nikolaj Coster-Waldau is an actor fated to play doomed characters who live their lives bristling against the reputations they forge for themselves. Small Crimes funnels both of their proclivities as artists into one coarse package, a crime flick about Joe (Coster-Waldau), a corrupt cop fresh out of prison and immediately snared in a web of schemes and murder; he’s trying to cover his ass, but he’d really rather be left alone to his own conniving, dishonest devices. At least then he might be able to reconnect with his estranged daughters, though given that Joe lies as easily as breathes, maybe not. Katz washes Small Crimes in melancholy and grit, minor but not without weight or impact. You don’t feel as guilty watching Joe struggle to do right by literally any of the characters in the film as you should (especially his parents, played by Jackie Weaver and the great, achingly genuine Robert Forster), but you do feel grimy and even a little guilty by the time the whole thing reaches its conclusion. (***.) 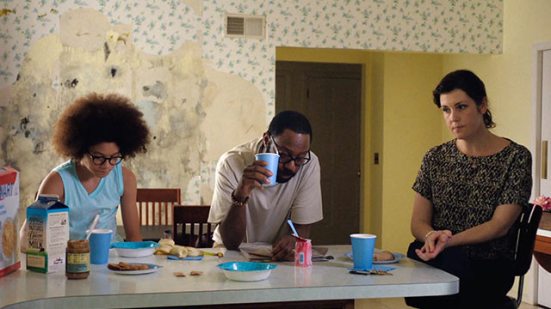 If you’re looking for a great 2017 release that dives into modern American race relations, watch Jordan Peele’s Get Out. If Get Out isn’t suited for your artistic and political palate, watch Rob Meyer’s Little Boxes instead. This is the year’s friendlier cinematic take on the divides between white folks and black folks, a movie where an interracial New York City couple, Gina and Mack, (played by Melanie Lynskey and Nelsan Ellis) move across the whole damn country with their son, Clark (Armani Jackson), and run into a whole host of dicey race relations issues with their new neighbors. The film works best, perhaps unsurprisingly, when focused on the blithe, unwitting ignorance of the well-meaning honkies who make all kinds of microaggressions against Mack and Clark. Their blackness is like a magnet to their community’s honky population, and as is liable to happen when whites underexposed to diversity are suddenly exposed to diversity, things get uncomfortable really fast. But Meyer cuts the discomfort with a thankless arc for Lynskey that only halfheartedly addresses the complications of being the odd person out in a mixed-race family. You wish Little Boxes had the guts to go there and follow exploration of the movie’s themes to their logical end, but Meyer plays too safe and too cutesy for his own good and the results are frustratingly watered down. (**1/2.)