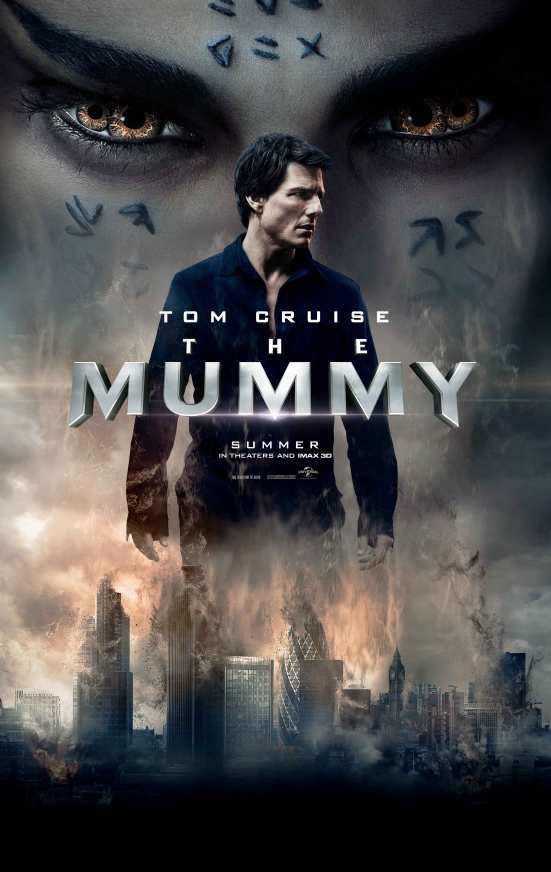 (Author’s note: I’m trying this new thing where I will attempt to review movies here if I’m on assignment writing about ’em in other capacities elsewhere. So when I interview talent, write editorials, or compose lists, I’ll circle back around to this space for capsule reviews as buttressing corroborative details.)

Dear Hollywood: Stop. Look, I’m all for innovation in movies and especially in blockbusting, that stale and worn-out mode of big ticket filmmaking, but Marvel can get away with a shared movie universe, DC can get away with a shared movie universe, and Universal is neither Marvel nor DC, even if they had Frankenstein’s monster dust it up with the Wolf Man back in 1943. As the infrastructure of a new franchising venture, The Mummy is a fucking catastrophe. As its own thing, it’s not much better, mostly because the requirements imposed on Kurtzman’s “film” by its franchising roots prevent it from actually being its own thing at all; it’s an origin story for Tom Cruise’s character, a roguish soldier-of-fortune who wakes up the vengeful, pissed off Egyptian princess Ahmanet, played by Sofia Boutella, and tumbles into a world of skeletons, spirits, haunts, and other things that go bump in the night, including my patience, which careened around inside of my skull for The Mummy‘s hour and forty seven minute running time. Boutella is the brightest spot in an otherwise shoddy production, constantly finding ways to adapt her gifts as a dancer into performance, but the script does her character disservice after disservice while Kurtzman and his crew rip off media ranging from Game of Thrones to The Avengers to Alien: Resurrection (of all things); there’s scarcely an original bone in its desiccated carcass. (**.)

Whether you have a taste for comedies that take a dip into heavy drama or not will dictate your appreciation of Zoe Lister-Jones’ Band Aid, but if you’d rather the film maintain its sillier bent from start to finish, well, I can’t say I blame you; the “stuff” of Band Aid‘s last twenty to thirty minutes is heavy, and unpleasant, and relentlessly sober, which is a very critic-y way of saying that they’re a king bummer. But they’re also honest, authentic, and true, especially if you’ve been in a long-term relationship, whether that long-term relationship involves vows or not. Lister-Jones has a strong sense of what being married is actually all about, unsurprising given that she’s married herself: There is give, and there is take, and there has to be an equal amount of both for both partners, else the cosmic balance shifts into disarray. Apropos of Band Aid itself, there’s a proper equity between humor and gravity here, though if we’re being honest, maybe there could be a little bit more of the former to compliment the latter. When the film gets serious, it gets serious, though at least the seriousness is buttressed by profound insight into relationship politics (and by Lister-Jones’ terrific chemistry with Adam Pally). (***1/2.)

Every Krisha fan and their cool grandma will end up writing a thing or two about Shults’ fixation on families (including me!), but divorce It Comes at Night from his 2016 debut and the film is perfectly compelling on its own merits. And why wouldn’t it be? Shults is a very talented filmmaker. Even if It Comes at Night had zero connections with Krisa aside from Shults, it stands to reason that it’d still be pretty good just based on his talent, though “pretty good” does the film a grave disservice; it’s superb, a natural and naked expression of the horror that lingers just beneath Krisha‘s surface as a familial drama. Here, rather than at Thanksgiving, Shults sets his story after a Judgment Day of a sort, where mankind has been ravaged by a disease that’s as infectious as it is fatal, focusing on a family (comprised of Joel Edgerton, Carmen Ejogo, and Kelvin Harrison Jr.) as they try to survive in a boarded up farmhouse. Then Christopher “Hey” Abbott arrives with Riley Keough and Griffin Robert Faulkner in tow, and It Comes at Night ratchets its tension by way of paranoia and distrust. If there’s a horror film that’s more perfect for 2017, I’m not sure what it is; a choice between your family and basic human decency isn’t much of a choice at all, and Americans not only made their choice this past November, they’ve repeated that choice every day since. (Hey, at least we’re not all puking blood as we lie in bed covered in painful boils. Seems like a win.) Shults uses intimacy as the key to engineering It Comes at Night‘s nightmarish scheme, trapping us with his characters as their options for survival dwindle and civility devolves into animal savagery. (****1/2.)

One thought on “Review Round-Up: Give The Mummy A Band Aid When It Comes At Night”