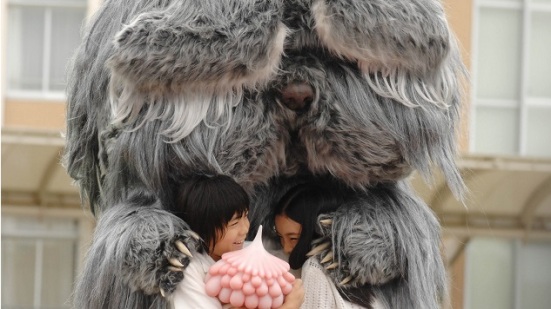 “Fair warning: You may want to precede your first viewing of Japanese artist-filmmaker crossover wunderkind Takashi Murakami’s Jellyfish Eyes by reading the essay Glen Helfand has penned for Criterion’s Blu-ray release. If you like to walk on the wild side, go right ahead, check out the movie before Helfand, but you’re just increasing the odds that your takeaway from Murakami’s loopy, melodramatic genre mash will boil down to bafflement. Helfand’s writing gives viewers proper context for engaging with both Murakami as a creative type, and withJellyfish Eyes as a product of its era; asGodzilla is to Hiroshima, so Jellyfish Eyes is to the Fukushima natural and accompanying nuclear disasters of 2011. It’s also a charmingly bizarre cocktail that mixes kaijuflicks with Ghibli-brand magic, Pokémon, Sailor Moon, and probably a dozen or so other influences that aren’t quite as easily sussed out in a single sitting. If Murakami’s reference points are varied and odd, though, his thematic explorations—about human interactions with technology, the conservation of our planet, and the consequences of miscommunication—ring much more clearly. Jellyfish Eyes is an odd duck, but its substantive cuteness and earnestness should win over even less adventures cineastes.” (Via Paste Magazine.)