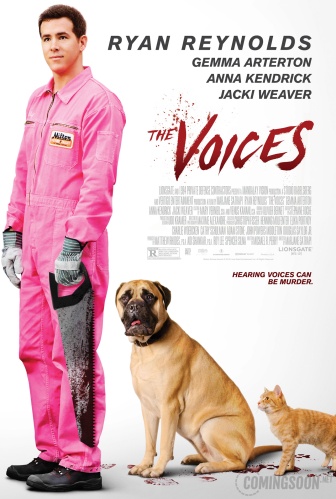 “There’s nothing wrong with talking to your pets. But if they start talking back, well, that’s a cause for concern. Such is the magical realist scenario director Marjane Satrapi explores in The Voices. Jerry (Ryan Reynolds) is an upbeat and peculiar factory worker who spends his time at home having conversations with his cat, an ill-mannered orange tabby named Mr. Whiskers, and his dog, a loveable bullmastiff named Bosco. The former tries to persuade his owner to kill people, while the latter offers soulful arguments against his feline counterpart’s truculence. It’s a weird movie on paper (and weirder still in practice), but The Voices’ most unexpected detail may be actually its behind-the-camera pedigree instead of its subject.” (Via Movie Mezzanine.)