Too many contemporary biopics consciously and repeatedly make the same mistake: they struggle in vain to dilute the whole of their subjects’ lives into two hour chunks of running time, and they often end up scattered, non-cohesive, and aimless as a result. It’s a dual-pronged problem of too much content being stuffed into too narrow a space, and a recurring conundrum that modern studio biopics often fail to answer. How can a single film effectively capture a complete macro perspective on the life and times of a very real human being within the confines of its narrative limits?

Whether Mexican actor-cum-filmmaker Diego Luna (Y Tu Mama Tambien) is aware of this all too common genre pitfall or not, he mostly manages to sidestep it with his new film, Cesar Chavez. An ode to the titular Mexican-American labor leader and civil rights activist, the film chooses to focus only on specific sections of his career rather than burden itself with the full scope of Chavez’ lifetime. (Why Hollywood hasn’t yet realized that less is more in the case of the biopic remains a mystery.) Luna’s overarching interest lies in Chavez’ efforts to win fair treatment and wages for Mexican field workers, but he uses only a handful of events – the Delano grape strike and the Modesto March chief among them – as touchstones in his plot.

It’s a move that works out for the better. His film ultimately feels much more finely-honed than competing entries in biopic canon, which is to say that it meanders, but with slightly more purpose. If Cesar Chavez does a fine job dodging the lion’s share of the troubles plaguing its cinematic cousins (notably last year’s batty, overly theatrical Jobs), it still succumbs to an unnecessary need to start at the beginning of Chavez’s story, opening on a schizophrenic note that makes the film somewhat difficult to get into at first. Luna fumbles his introduction, indecisive over how much he needs to tell his audience in order for the film’s events to make sense; his opening scrawl appears to be a concession to convention.

Fortunately, his preamble is mercifully short, and before Cesar Chavez loses its way entirely, the fledgling director finds his groove. (It’s worth noting that this picture marks only his second jaunt behind the camera, after 2010’s family drama Abel.) Our story kicks off as Cesar (Michael Pena) articulates the somber reality of growing up in 1920s Arizona; we learn that the Chavez family suffered through the Great Depression, and that he personally witnessed firsthand the injustices visited upon migrant laborers in America from a very young age. Luna presents a lot of information here context-free, so for those who aren’t as well-versed in history, the ride gets off to a decidedly bumpy start. 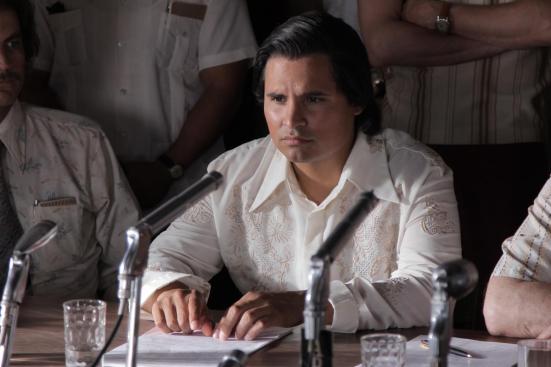 From there, the film smoothly segues into the aforementioned moments in time so that we can start taking the measure of the man as he endlessly strives for equality for his people. Cesar Chavez is clearly a work of passion and ambition, one that most directors would probably infuse with a grander sense of scope. Luna, however, plays the material with a surprisingly intimate touch, which actually feels totally appropriate. The movement Luna documents here is, after all, about people, and so it makes a great deal of sense that a film about said movement would benefit from a personal, ground-level point of view.

Humanity is Luna’s primary goal here, in every sense of the word. He carefully steers around staging a hagiography, blending his obvious reverence and admiration for Chavez with truth; it’s not the most naked observation of a public persona you’ll ever see on the silver screen, but Luna very clearly intends on painting his protagonist with nuanced strokes of character. Is Chavez a savior? Is he an emblem for an activist ideal, a beacon for a beleaguered, oppressed minority? Or is he just a man, one who has his own foibles and flaws (notably his fractious relationship with his eldest son)? Cesar Chavez’s reply to that question lands somewhere in between each of these, rendering a respectably complex portrait of its central figure.

But equal – or perhaps greater – credit for that depiction goes to Pena. Pena holds court in almost every single one of Cesar Chavez’s frames; he’s a quiet presence, just as Chavez himself reportedly was, but he’s powerful, heartening, and never anything less than earnest. Pena has come a long way since his days of guest starring on TV shows like Andy Richter Controls the Universe, and here he’s refined his talents so much that he practically disappears into the role, an invisible but nonetheless indelible force. He embraces Chavez’s best and worst merits with the same respectful vitality, and represents the single strongest recommendation for seeing Cesar Chavez at all.

There is, of course, more reason to see the film than just Pena. Luna’s still defining his style as a filmmaker, but he’s gained a new level of confidence in his latest venture, and the supporting cast (including a diabolically nasty yet graceful John Malkovich who’s one mustache twirl away from Snidely Whiplash) is uniformly strong if frustratingly static. Cesar Chavez doesn’t quite reinvent the biopic wheel, but it does underline quite clearly what’s wrong with the current blueprint while doing justice to Chavez’s legacy and spurring anew current conversations about immigration reform. If that’s not reason enough to celebrate the film’s success, then nothing is.