Ruby Sparks may be the latest film from Jonathan Dayton and Valerie Faris, the minds behind 2005’s Little Miss Sunshine, but it’s entirely possible that primary authorship of the picture belongs entirely to one Zoe Kazan. Kazan not only plays the red-headed manic pixie dream girl of the title, she wrote the screenplay, too, and as light and frothy as this story feels, it also has a surprisingly sharp set of teeth, which Sunshine—for all of its infectious outrageousness—lacks.  Oh, Dayton and Faris serve, there’s no doubt about that; but while they’re located in the directors’ seats, there’s a sense that they’re just instruments for realizing Kazan’s sweet, hilarious, and at times shockingly dark confrontation of both the manic pixie dream girl figure and the male gaze.

It’s interesting that Kazan’s real-life boyfriend, the great Paul Dano, joins her in this particular endeavor; he’s playing an uncomfortable and deeply grey role alongside Kazan in their first on-screen pairing together. Not that Dano’s literary has-been, Calvin, is a bad guy. Attaining a huge and sudden level of success at 19, Calvin’s just wading through life trying to mine his next novel from whatever experiences he can while patching the wounds of a failed relationship. Uninspired by life, he suddenly starts dreaming about a lovely, spirited girl named Ruby, and overnight she becomes his phantom muse. Until, of course, she transitions from being a figment of his imagination to being a living, breathing, vivacious human being wandering around in his house.

A gauche viewer might smugly observe Ruby Sparks as a modern take on Pygmalion, and they’d be right, but the emphasis should be on “modern”, even if Calvin himself is hopelessly stuck in the past. (He uses a typewriter and does not own a computer. Take that smartly deployed bit of symbolism as you will.) Ruby speaks, dresses, and acts like a member of today’s hipster culture, but she possesses the sharp mind bequeathed to her by her unwitting creator, though she’s not aware of this dichotomy whatsoever. In other words, Ruby’s substantive rather than vacuous. That doesn’t veer her off the manic pixie dream girl path, but, cleverly, Ruby Sparks gets away with the trope thanks to its basic conceit. Of course that’s who Ruby is; she was written by a man who patently doesn’t know or understand women whatsoever, and who exists in a lonely, isolated place. Ruby is everything Calvin wants her to be, and what he wants her to be is the embodiment of that character archetype. She’s his very literal dream girl come to life.

That leads our hero to confront a daunting, sobering reality: once he has Ruby in his life, he doesn’t really know what to do with her. And as much as he is, for all intents and purposes and as far as it concerns Ruby’s existence, God, he’s also still a self-absorbed young man trying to figure himself out. Normally, Ruby would be the one to help him with that, and yet Ruby Sparks doesn’t end up being a film about how the love of the right woman can totally turn a man’s life around. It flirts with that idea, but takes us to a more nihilistic place by focusing on dominance tropes; there’s a higher emphasis placed upon the inequitable power relationship between Calvin and Ruby than on quirky, airy, and predictable melodrama. 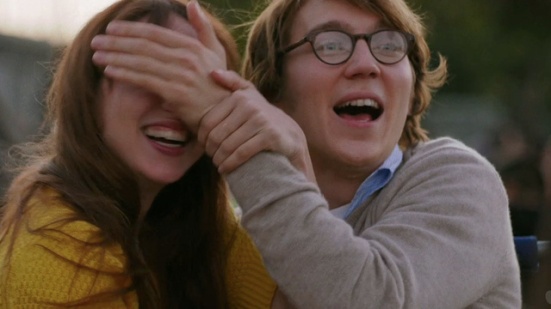 None of this is to say that Ruby Sparks does not invest any time in being the feel-good picture marketing dresses it as. At times, it soars on the strength of Kazan and Dano’s chemistry with one another, though that may not be saying much in the long run given their real-life status as an item. However you’d like to characterize their on-screen pairing, it works; they’re lovely together in their better moments. Much of their energy derives from the seemingly bottomless reserves of moxy Kazan has stored in her soul, but it’s Dano who tempers the unbridled joy of her spirit with his awestruck stare. Even when he proves to himself that Ruby is flesh and blood, he’s still in utter disbelief that she’s real, and that she really loves him.

Their differing, yet complimentary, personalities lend a firm hand of honesty to the film. Opposites really do attract. At the same time, that division ends up creating a gap between them, and when it does Ruby Sparks‘ tone takes a downward spiral into some truly unsettling stuff. Nothing violent, mind (though one could argue that the wholesale enslavement of a human being is itself an act of violence), but deeply psychological– which is discomfiting in its own way. Ruby Sparks never forgets that it’s a romantic comedy, but it intentionally veers sharply away from that milieu in the final half hour to personify its overarching metaphor about male dominion. Considering the film’s pedigree, its climax may come of as somewhat shocking, and it’s clearly meant to be.

And that’s a good thing. Ruby Sparks‘ most resonating material is found in the degradation of its central relationship, an unexpected surprise given the outward appearance the film projects. This is a movie that’s sunny on the outside, grim on the inside, and rife with compelling insights and ideas for us to mull over; the buoyancy of its initial humor and spirit almost feels like a cover for the more serious, dramatic flourishes of the third act. Which characteristic is more likely to impress itself on viewers is variable, but Ruby Sparks‘ two separate halves connect to create a satisfying, mostly well-focused whole. (There’s a question as to whether a tangent involving Annette Bening and Antonio Banderas as Calvin’s mom and her new husband is totally necessary.) Ultimately, the film is as substantive as it is frivolous, sweet as it is bitter, and a love story that feels appropriately contemporary in the age of E-Harmony.