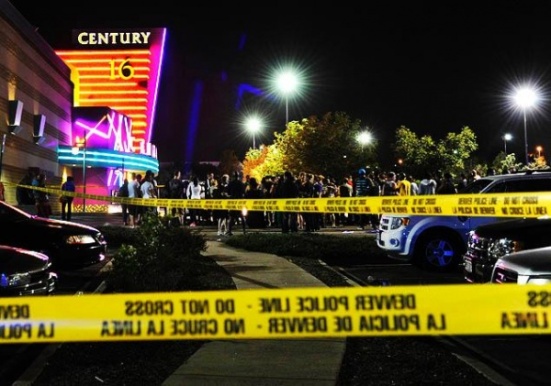 I’m hesitant to put any further words out on the Internet regarding the Aurora shootings than those I tweeted Friday morning after waking up, checking my Twitter feed, and learning about that awful event piecemeal through other 150-character expressions of shock and sorrow. There’s a line– not, in my opinion, a particularly fine one, but a line nonetheless– between respectful editorials and thought pieces, and exploitative “gimme gimme” journalism intended to draw page views while sparking skewed, ill-informed debate*. While I’m not the type to favor the latter enterprise, I remain dubious of this article’s necessity even as I type it up late Sunday night before going to sleep. There are plenty of other, better news and blog posts out on the web covering this incident; do we need one more?

The thing is, I can’t in good conscience say nothing. I’m a movie fan, and while James Holmes could have chosen any stage in the world to commit his shooting spree, he chose a movie theater. Not only that, but he struck during a midnight showing of one of 2012’s most anticipated films, The Dark Knight Rises. I’m not one to remain silent about that sort of thing. But I also like to think I’m a responsible enough human being to strike neither a chord of terror nor make disingenuous displays of unearned grief. So then, readers, permit me my seven hundred words to express my feelings on the tragedy in the knowledge that my intentions are good.

What Holmes did is terrible. I am not one so well-educated and so insightful to be able to pin down what drove this young man to storm a crowded theater and open up with a military-grade assault rifle on unsuspecting, confused, ultimately terrified civilians. Like many commenting on his actions, I’m not qualified to even dream of his motive. All I know is that early Friday morning, one person made the active choice to take the lives of a dozen human beings, wounding almost five times as many in the process. As a community, Aurora’s citizens now are left to mourn, rebuild, and move forward together; as a nation, we’re left to stand by them in whatever ways we can, however quiet or personal they may be.

We know more now about the attack than we did three days ago, but not much more. And that’s a temptation, because inevitably, we want to understand why these things happen. But we won’t, not for a long time– and that’s if we ever come to understand Holmes’ motivations at all. Is he just a disgruntled, angry, obsessive fan? Is he a political terrorist? An over-stressed student? Or is he just plain nuts? I think at this point, many of us want to hear a reason behind the shooting not because it’ll make things better, but because it’ll give us closure. Nothing is worse than not understanding events this senseless, even if gaining the insight we morbidly crave doesn’t necessarily assuage us of our fears or sadness. So while we might want to connect Holmes to, say, the abusive fan culture that led Rotten Tomatoes to shut down comments on early reviews of The Dark Knight Rises, it would be irresponsible to do so.

Because the reality is that we don’t know. And we have to accept not knowing as well as the potentiality that we may never know, difficult as that is. Instead of suggesting that he believed himself to be the Joker, instead of panicking about the possible ramifications of Holmes’ actions on the movie going experience, instead of blaming one side of the political divide or the other, just let a tragedy be a tragedy. No one gains anything by offhand, callous, shameless rumor-mongering, least of all the victims and their friends and families.

There will be a time to talk about gun laws, the mind-set of Holmes, and other factors surrounding and leading to the attack. But it isn’t now. Now is the time for respect, for introspection, to reach out, and to be united in the face of something horrible and heartbreaking.

*And arguably, even though I’m not spouting hearsay and gossip for personal gain, I’m still exploiting the situation to a degree.