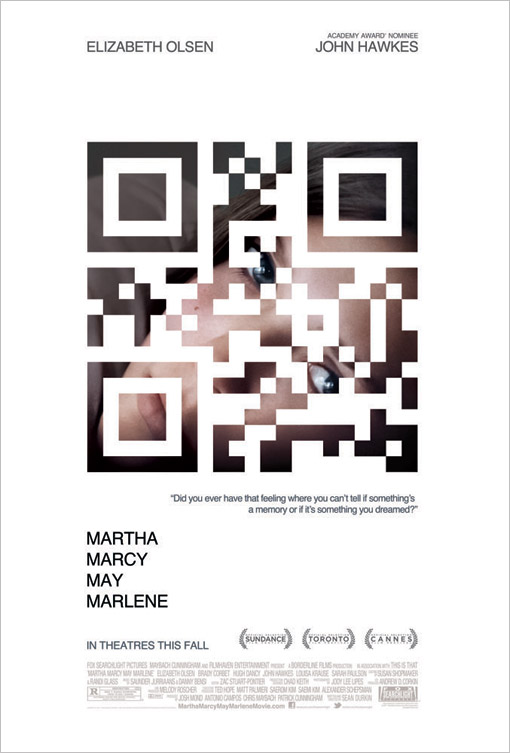 There’s much and more about Martha Marcy May Marlene that’s worth discussing, but there’s no better starting point than Elizabeth Olsen’s central powerhouse performance. When I write about a film, I tend to nestle discussion that element deep within the body of the review rather than treat it as a preliminary point; in the case of Martha Marcy May Marlene, that factor comprises the very foundation of the film, and so there’s no worthier place to begin than the introduction of the youngest Olsen sister to the world. She, making her acting début, represents the glue that binds Sean Durkin’s spellbinding, hypnotic, and thoroughly accomplished film  together.

Olsen plays Martha, a young woman whom we meet as she makes her escape from a cult located in the Catskills; we have no explicit details of the impetus behind her flight, but after a quietly creepy moment with a pursuing cult member there’s no question that she’s running for a good reason. Lacking options, Martha contacts her sister, Lucy (Sarah Paulson); Lucy whisks her sibling away to the Connecticut lake house she and her husband Ted (Hugh Dancy) rent. But Martha, shaken and confused by her experiences with the cult, isn’t totally free of their influence even in Lucy’s custody, and she grows increasingly paranoid over her safety as time ticks by.

And for every second that passes, ratcheting up Martha’s anxiety, we’re right there looking over Olsen’s shoulder. She’s Martha Marcy May Marlene‘s* heart, soul, and anchor; there’s never a moment we’re without her, at least not for more than the time it takes to blink. That’s no small task for an actress setting foot into the indie spotlight for the first time, but Olsen’s so good that she makes the entire performance look effortless. And, of course, her work here is anything but; Martha’s a melting pot of neuroses and delusions, and she can accelerate from serenity to the utmost verges of panic at a moment’s notice. So Olsen, then, has to run an emotional decathlon to fully realize her character, and she does so with all the confidence and assurance of an infinitely more practiced leading lady.

In short, she’s a marvel to behold. Martha Marcy May Marlene, for everything else it is, may just go down in cinematic history for being the film to acquaint indie audiences with Ms. Olsen’s impressive talents as an actress. She’s so outstanding, in fact, that she’s something of a danger to the rest of the film’s praise-worthy merits, of which there are many– if we’re wrapped up in applauding her work here, after all, then that leaves less room to talk about what else works in the movie’s favor.

The short answer to that is “everything”. Martha Marcy May Marlene could well be viewed as a movie of “firsts”; it’s not only Ms. Olsen’s first major motion picture, but Durkin’s as well. In his case, the feat is no less extraordinary; this is not a film that looks like it had a first-timer at the helm steering the entire show. Martha Marcy May Marlene boasts truly excellent craftsmanship at all stages of the production, employing melodiously haunting cinematography and a minimalist score that highlights the tension lurking at the fringes of every scene.

But most of all, Martha Marcy May Marlene is a masterclass of editing, a film that puts critical emphasis on the importance of that invisible art form and shows how it’s done with jaw-dropping precision and finesse. In fact, the use of editing here is almost as equally vital to the film’s success as Ms. Olsen’s turn in the principal role; it’s seamlessly propulsive, stringing together the picture’s two halves– the present, in which Martha attempts to readjust to normal life (and fails dramatically), and the past, in which we see exactly what led her to flee the cult and Patrick (the superb-as-always John Hawkes, playing underhanded and yet keeping his cards close to his chest), its charismatic, quietly dangerous leader.

Taken together, Zachary Stuart-Pontier’s editing and Ms. Olsen’s performance wrap Martha Marcy May Marlene in a beautiful, spellbinding haze of ambiguity. How much of her behavior is influenced by something genuine or by her steadily increasing levels of paranoia? She suspects Patrick’s fellow cult members of tracking her down, but neither Ms. Olsen nor Durkin reveal enough for us to safely judge whether she’s onto something or chasing after ghosts. Maybe in another movie, that might feel like a glaring weakness, but Martha Marcy May Marlene shows its aplomb so much in its technique and its central performance that the uncertainty surrounding its events becomes just as much a part of the film’s chilling timbre.

*I refuse to abbreviate the title, because a) it’s a lot of fun to type and say, and b) that’s just cheating.