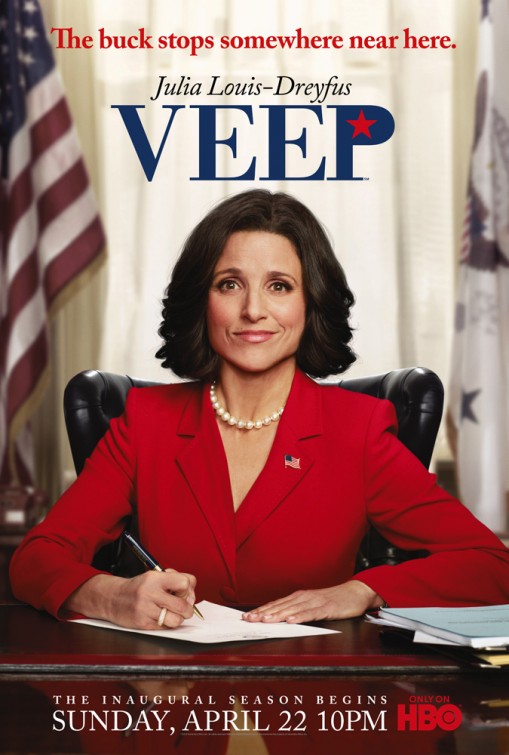 By now it’s indisputable that Armando Iannucci has the market cornered on fly-on-the-wall, documentary-style political satire. The man behind not only 2009’s outstanding In the Loop as well as 2005’s BBC Four program The Thick of It, Iannucci has essentially built a career on both the style and content that characterize the vast majority of his output– which spans television, film, and radio altogether. In short, he’s no stranger to literally any narrative medium you can throw at him, and so no assurances are necessary to buffet his arrival at HBO with Veep, his latest effort in the category of fiction– politics and parody meet cinéma vérité— and a marvelous companion piece to the rest of his body of work.

Veep, as you might expect, unfolds within the confines of political offices, and as the title indicates focuses on the vice president of the United States– manifested here by Julia Louis-Dreyfus, plucky, mildly acerbic, and either a bumbler herself or the product of working in an office filled with bumblers. If In the Loop proved to be too much for those of you with sensitive political leanings, Veep‘s American roots and references will probably make you blanch; as in Iannucci’s searing reconstruction of the events leading toward the Iraq war three years past, the humor here grounds itself largely in the unkind. If Iannucci has a singular goal, it’s to make nearly everybody involved in his plots look as foolish (at best, mind) as he possibly can, sprinkling humiliation and debasement rather liberally across the course of the show’s running time.

In short, everyone here is made out to be incompetent. (Except for the VP’s executive assistant. She comes out looking like the smartest person in the room more often than not.) This goes for our vice president, Selina Meyer, too, though sometimes it’s hard to tell if she’s just a high-positioned, much more vulgar and powerful version of Michael Scott or if she’s a victim; she’s surrounded, largely, by idiots, or at least people who let their inner idiocy get the better of them. Here, Selina and her team– comprised of Chief of Staff Amy (Anna Chlumsky), Director of Communications Mike (Matt Walsh), personal aide Gary (Tony Hale), and the aforementioned assistant, Sue (Sufe Bradshaw)– manage to make a mess out of a variety of tasks; whether failing to smooth  over relations between the VP’s office and the plastics industry or mis-signing a condolences card for the wife of a recently deceased senator, there’s little that these people can’t bungle in one way or another.

Which is precisely what we hope for. Who actually watches programs like this– or, say, Parks and Recreation, to which Veep may be compared– to find success and optimism in the subject matter? The truth is that politics are no laughing matter (perhaps even more so today), and odds are one might tune into a show like Veep explicitly to see that institute deflated and rendered somewhat less serious. Whether it’s a release for pent-up frustration toward the function of government or just a reminder that even in the utmost tiers of power not everybody has everything together, Veep— with its ruthlessness, absurdity, wit, and verve– delivers, and stands out as a future contender for “best comedy of the season”.

In large part, that’s Iannucci’s doing– he’s sharp and insightful, and even when the plot takes a turn for the flat-out loopy (e.g. Gary sneaks into the White House to retrieve the card bearing Amy’s name instead of Selina’s), he’s saying something valuable and interesting while maintaining the air of reality that defines his work. But I accord a great deal of credit also to Julia Louis-Dreyfus, who for lack of a better phrase is thoroughly on fire throughout the entire episode. Forget Christine and maybe even Elaine; Selina’s her own woman entirely, and unfettered by the constraints of network television, Louis-Dreyfus lets loose and dives right into the character with abandon. It helps that she’s supported by a very able cast, notably Loop alumnus Chlumsky and veteran “hey I know that guy” actor Walsh, but even when Veep breaks away from Selina she nevertheless remains a presence thanks to Louis-Dreyfus’ excellent work here.

Unlike HBO’s most recent premiere, the unfairly maligned Girls, Veep is a clear home-run. Iannucci might have paved his own road or written his own ticket with Loop and The Thick of It, but Fundraiser shows him giving zero slack regardless; he’s earning his wages here. Maybe the clearer criticism to be leveled at Veep lies in the dearth of range it shows in Iannucci as a storyteller, but he’s so good at maneuvering in his chosen milieu– and so adept at differentiating each of them despite their interconnected ideas and conceits– that it’s hard to hold that against him.