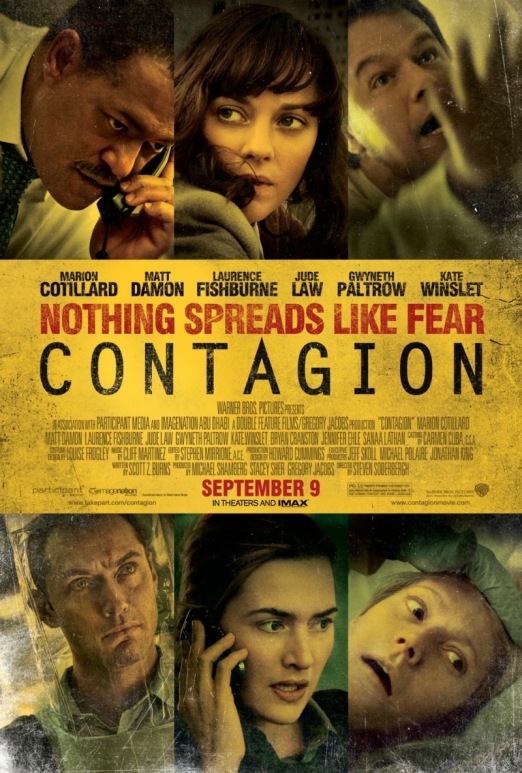 I’ve said before that Steven Soderbergh is a genre chameleon; if this year’s Haywire doesn’t unequivocally prove that, then last year’s Contagion should, and soundly at that. Contagion may not be a straight genre film in the way that the multi-faceted filmmaker’s bone-snapping arthouse action film is, but it nonetheless exists as a synthesis of numerous filmmaking categories– essentially, it’s the result of combining strands of DNA from movies like Traffic with something very specific, namely Outbreak, an analogy that’s been oft-touted by other critics as well. If I sound like a parrot it’s only because the comparison is so perfectly on-the-nose, but there’s something else to Contagion that many seem to have missed: horror. Fear. Rampant paranoia. Contagion should, and likely will, scare anyone who sees it. If you’re not a germophobe before you see it, you may well be one after you have.

Contagion‘s title doesn’t leave very much to the imagination; it’s not a metaphor, it’s not a clever ruse. It’s honest advertising. Soderbergh’s film details explicitly the rapid spread of an especially virulent and nasty strain of virus heretofore unknown to the CDC and the WHO, and the efforts its members exert to halt its advance and, ultimately, develop a cure. No smoke and mirrors here, unless you count the ending reveal of the disease’s origins; just science and emotion. Like Traffic, the narrative is fractious; Soderbergh follows more than half a dozen characters across the span of roughly a year as each of them reacts to the spread of the pandemic in their own ways. Some of them (Laurence Fishburne, Kate Winslet, Marion Cotillard, Elliot Gould) try in earnest to get a handle on the virus; some of them (Matt Damon) just try to survive it; some of them (Jude Law) entertain conspiracies over the events unfolding in its wake.

And while we never linger on the devastating reach of the disease, we do see just how harsh its touch can be. There’s a sense of scope and scale and impact that pervades the fabric of the movie even though Soderbergh, more often than not, homes in on the micro over the macro; occasional shots of a mass grave or a stranger dying in a bus or a hotel room give us all the necessary overview to understand the lethal nature of the epidemic. Meanwhile, Soderbergh rather cleverly keeps us up to date on the global death toll through spurts of dialogue between completely separated characters, sneaking exposition and info dumps into scenes where neither feels forced or out of place. More than anything, he’s focused on the directions people will bend in a disaster situation of this persuasion. In other words, Contagion isn’t a film about graphically capturing the impact of the eponymous plague but documenting how its characters respond to it.

For the most part, Contagion follows attempts to study the virus, vaccinate the population worldwide, and recover from the outbreak; our most persistent anchors are CDC scientists and epidemiologists, who spend the bulk of their screen time in government facilities or on the ground directly battling the illness. These scenes may be what distinguishes Contagion from other movies of its sort. Soderbergh, not one to eschew detail and fabricate reality, digs into heavy science while favoring accuracy over heightened drama– but not at the expense of genuine tension. If much of what these characters discuss with one another sounds foreign to our ears, we at least only need to understand the basic meaning of their words, and besides, that aforementioned slyly deployed exposition translates the most important pieces for us.  You may not know about r noughts going into the film, but you’ll get it once you come out the other side.

But Contagion isn’t just about science-speak; more centrally it’s about human elements, to which most of us can much more easily relate. Damon, playing a Minnesotan father and husband, represents our clearest audience identification character; his arc deals with the impact of the outbreak in a much more personal, emotional way than anyone else’s, and may be the most affecting of the bunch. Partly, that’s on Damon. In role after role, he continues to prove himself as one of the best male leads working today, and his turn here is no exception. Beset by sickness and death all around him, Damon watches the world around him crumble from ground zero as the people of his town loot, riot, and even rob and kill each other to stay alive; seeing the tragedies unfold around him, along with suffering his own losses, just motivates him to maintain his morality and humanity (which makes him something of a foil to Law’s unscrupulous, ignorant, self-interested alarmist). Damon brings both of those ideals to the surface, along with his character’s vulnerability and ratcheting stress. It’s a powerful, engaging performance from an actor who never stops improving.

Which isn’t to say that Damon’s moments mark the only ones that are so clearly driven by emotion. Soderbergh never lets us forget that even our CDC and WHO agents are, beneath everything else, just people trying to do the best that they can to save lives and find a solution. They have loved ones they care for, too. They have as much on the line as anyone else– they just enjoy a perception of increased protection and access to care and supplies the rest of the world does not. And some of the most heartbreaking moments occur not within Damon’s celluloid bailiwick, but in the hospitals and labs where these characters do their work. Ultimately, that may actually be Contagion‘s one big illusion. For a film about a viral catastrophe, it’s completely centralized on developing its characters and gradually revealing them as rounded, vital people– and among the big questions Soderbergh poses about social order and the communication age, “what would you do?” ends up being the most prominent query of them all.