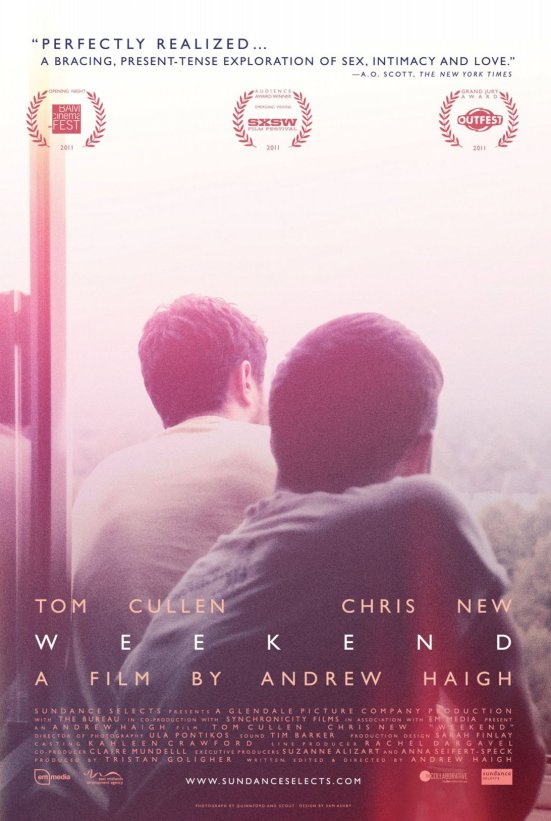 Weekend can easily be described as unabashedly, unashamedly, graphically sexual when it wants to be– or needs to be. For many, this may be a point of contention. Those who are uncomfortable with or disdainful of homosexuality, for example, will quite likely turn away from the film before it even starts; the loss, frankly, is their own. Even tolerant and open-minded people might find themselves feeling uneasy whenever the film’s leads, Glen and Russell, fool around or have sex, but I think that’s part of the challenge of the film for heterosexual viewers. In Weekend there’s a broader story about love and romance intertwined with the film’s focal interest in issues and topics pertaining to homosexual life, one that examines the risks we take for the sake of meaningful intimacy and relationships.

Andrew Haigh’s film unfolds over the period of time between Friday and Monday, following the out-but-not-all-the-way-out Russell (Tom Cullen) from a party at his friend’s house to a busy gay bar in one evening, where he meets Glen (Chris New). Haigh places them in the same frame, but never together; when we’re shown the next morning, Glen’s presence is something of a surprise, an effective reveal and a clever trick on Haigh’s behalf. Glen’s almost the polar opposite of Russell. Where the latter is more reserved to the point of appearing ashamed of his sexuality, Glen embraces his identity as a gay man. He’s also an artist, and he invites Russell to participate in his latest pursuit at recorder-point; inevitably their flirtations start to go somewhere more substantive and questions of monogamy and dedication are raised.

Linklater’s DNA can be found in Weekend, but Jesse’s and Celine’s dilemmas differ greatly from Russell’s and Glen’s. Time is a factor, of course, but these two young men have matters to contend with that a “traditional” heterosexual relationship don’t. They can’t even hold hands in public, or kiss one another while waiting for a train on the platform without inviting scrutiny and criticism and verbal harassment. It’s not that hetero couples enjoy the benefits of living on easy street all their lives– even inter-marriage between men and women can still present an obstacle for them– but the differences between straight and gay are many, and Weekend concerns itself very much with how the world views what Glen and Russell come to share. In turn, it also comes to portray how they perceive the perceptions of others. Glen is more pent-up and angry; Russell is more passive. In effect, they’re something of an odd couple.

Haigh’s film, then, spends a great deal of time reconciling the differences and similarities between heterosexual and homosexual relationships. He’s not being documentarian here, but he is without question being completely thorough. There’s no stone Haigh leaves unturned in Weekend; he covers every base in the realm of romantics. Ultimately, though, Weekend certainly feels more geared toward a predominantly homosexual audience despite its elements of universality– but that’s no reason for heterosexuals to avoid participation. Haigh has simply done marvelous work here with his two leads; if good filmmaking is good filmmaking, then Weekend should be embraced without a fuss. 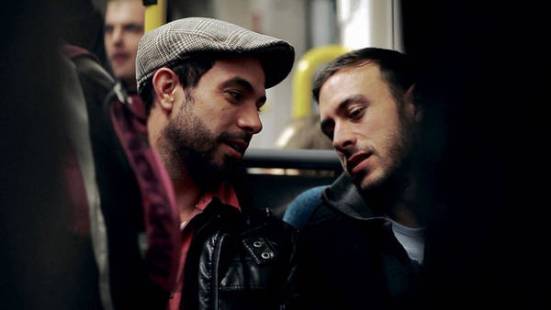 In a way, Weekend feels bold. It leaves little to the imagination and goes the distance not just in terms of detailed sexuality but in terms of character development. Glen and Russell both feel completely real. They’re whole men, not simply static representations of different ways of being gay; they both have fears, fears about forming lasting, substantial intimate relationships and about being gay in general in a world that still doesn’t fully tolerate gayness. Russell, an orphan, hasn’t had much of an opportunity to confront his sexual orientation by introducing it to other people. In point of fact it only seems that a handful of the people he knows are aware that he’s gay. Glen, on the other hand, is far more comfortable with himself and yet harbors a great deal of anger toward a society dominated by heterosexuality.

None of this, I think, is to say that Weekend has an agenda, though it’s fair to say that Haigh, Cullen, and New could spark an earnest dialogue about homosexual relationships with the film. Weekend is only intended to capture something that’s true, whether it’s Glen’s unrest or Russell’s meekness. At the end of all things, though, the film wrangles something genuinely sweet. Both men are lost or confused or damaged in their own ways; in finding each other they stumble upon hope that they can find respite from their personal troubles. For Glen, that means getting over his struggle against commitment; for Russell, that means moving past the hurt of never having the cathartic experience of coming out to his parents. Weekend depicts how these two men ultimately help each other mend their wounds with touching honest; the result is one of the most nakedly truthful movies of the year.

It’s interesting that in the same release year, two films could come out that both echo of Before Sunrise and Before Sunset; unlike Certified Copy, though, there’s no doubt that Weekend is a product of its performances. Cullen and New are daring actors. I have no idea if either of them is actually gay, and taking their acting into consideration I don’t know how much that matters. To say they’re both firmly convincing sounds like small praise, but they portray their respective characters with such sincerity that there’s never a moment where their status as actors can be considered. They sink into their roles. The resulting bond that forms between them feels emotionally authentic. Haigh captures their slowly developing love with care and affection, tempered with clean cinematography, and he deserves praise– but all told, Weekend is a triumph of acting first and foremost, an affecting love story and an important tale about the complexities of being gay in a heterosexist world.