2010, as a cinematic year, left me somewhat cold. I distinctly remember having a difficult time choosing my annual top ten, for two reasons. One, this time last year I’d only seen about thirty-ish movies; that’s not a very wide range of movies to choose from, though I was certainly able to muster ten films I was happy with. Two, and much more importantly, 2010 didn’t really excite me all that much. Even the movies that did make the cut for me are mostly films that I don’t really feel any pressing need to revisit; apart from the Inceptions or Black Swans or Social Networks, 2010 for me is comprised of movies that are certainly very good, but not exciting in the way that a truly great film should be. With few significant films to serve as emotional tethers to the period, I came out of 2010 feeling a bit jaded, let down, and even a bit worn out.

However, where 2010 felt largely bereft of standouts and game-changers and generally invigorating cinema, 2011 has boasted an explosion in quality filmmaking that’s left me more enthusiastic about writing than ever. Veteran filmmakers released movies that rank among their best, or which challenge our conventions of what a movie can be, while new talents burst into theaters with works that singled them out as potentially great directors years down the line. Even the lighter side of cinema has plenty to write home about, as a number of directors yielded movies that make up for a lack of high purpose by being incredibly engaging and well-made. If there ever was a year to get motivated and inspired about blogging, it’s 2011.

Not that the year has been perfect; it’s had its share of chafe. But even bad films are often worth talking about, and the bad is so outweighed by the good that in the end it hardly matters. And hey, some of my best writing this year has been aimed at some of the year’s worst films– which just goes to show that even a terrible picture has worth in its own way.

Maybe my exuberance can be explained by the prevailing attitude of this year’s cinema. Where 2010 felt listless, cynical, and often despondent– with some exceptions– 2011 feels hopeful. Perhaps that’s somewhat corny, or even naive, but I think it’s true. Consider the rash of optimistic films like Hugo, The Muppets, 50/50, The Descendants— I’ll also allow for We Bought a Zoo, despite my major misgivings about it– or a film like Weekend, which plays firmly in reality but nonetheless ends on a note of hope for its characters. Hell, even Attack the Block keeps a bit of optimism for itself; I wouldn’t classify it among the aforementioned pictures but there’s no arguing that there’s something hopeful woven into its narrative. And I think when you experience all of that hope in film after film after film, it’s hard not to grow a bit hopeful yourself.

So here’s to 2011, a great year in cinema and a great year for A Constant Visual Feast. Now– to the list, yes?

This year I’m doing things a little differently; rather than just slap down my top ten, I’m going to talk about some side films of varying degrees of interest, because a movie can inform a cinematic year even if it’s not particularly good. (And also because negative criticism can be fun.) Not only that, but I’m expanding my top ten to a top fifteen! I didn’t know that we were allowed to do that sort of stuff, but Ebert’s got a top twenty, the writers at CHUD have top fifteens, and some other bloggers have followed that same model (culminating, in some cases, with a top thirty). If everyone else is doing it, then why can’t I? Let’s get started off with something completely new in the form of a trio of…

Film we’ll be talking about for the rest of the decade: Tree of Life

I don’t think there’s really any way around this one; Terrence Malick’s Tree of Life is the sort of grand, opulent, top-heavy art film that demands to be seen and must be discussed and seen over and over again to fully understand. I’ve only seen it once; I want to go back to it eventually, because it contains so much story and data and deploys both with such non-traditional, discrete, fleeting methods that one viewing just doesn’t do it proper justice. Maybe in nine years, when we’re back here talking about the best of the decade, I’ll look back on the film unfavorably; maybe I’ll celebrate it as a masterpiece and a new watershed classic in convention-defying filmmaking. Either way, Malick deserves a lot of praise for the film by virtue of it being so bold and so beautiful and so unknowable. We’ll see how it fares against the ravages of time.

Film that can’t really be called a film in good conscience: Red State

It’s nice to see Kevin Smith trying to do something other than make dick-and-fart jokes while smugly making callbacks to spheres of popular culture, but I’m not going to say that he gets an “A” for effort. Red State is an odious, sanctimonious, disheveled mess of a movie that frankly doesn’t earn that nomenclature or even justify its existence; rather than serve as a narrative, Red State simply inhabits the screen as an hour-and-a-half hate rant against the Westboro Baptist Church. Having a perspective and an intent as a filmmaker is valuable, of course, but cinema’s a narrative form. Storytelling is the purpose. Smith, here, completely forgets that or willfully eschews it outright for the purpose of smearing one of the most infamous hate groups in American, and while I fall on his side of the fence in this conversation, I cannot at all get behind his efforts here. Intentions aside, Red State is a disaster. 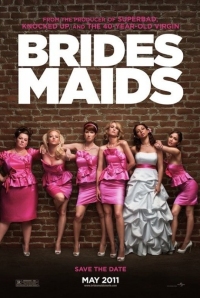 Most disappointing movie of 2011: Bridesmaids

I know! I know! I should love this movie, but I just. Couldn’t. Laugh. At. It. There are times, frequently involving Melissa McCarthy and Jon Hamm, where Bridesmaids is hilarious, but in a comedy that’s hyped to be as gut-busting as the film’s adherents claim I don’t expect to laugh every once in a while. I expect to be on the verge of doubling over from busted ribs, gasping for breath, at almost all times. It’s not a dud, it’s not badly made, it’s not badly acted, but it’s not equipped to rouse guffaws from the depths of my belly. I wanted to like it, I did– I really did. But nothing’s worse than feeling underwhelmed after coming out of a movie you expect to be great.

And without further ado– the top fifteen begins. 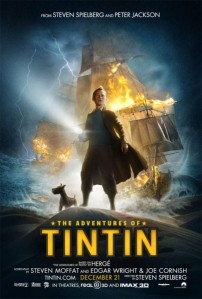 15) The Adventures of Tintin: The Secret of the Unicorn: “Tintin is a film that’s packed with detail and information, not just cinematic Easter eggs for fans of the series but for everyone. Every frame is stuffed with innumerable components that really allow the world Spielberg has constructed here to breathe deeply while shuddering to life. He’s given us rich, vibrant filmmaking here, coupled with absolutely wonderful world-building that transports us both figuratively and literally as Tintin globe-trots from England to the Middle East and back again. Spielberg and Jackson fashion a vast playground in which to spin a narrative and stage action set piece after action set piece and never fail to populate any of them with countless elements which give the film  much-needed vitality.”

14) Harry Potter and the Deathly Hallows, pt. 2: “…the entire series has just been one large build-up to this final two hour segment, and that the climaxes of each individual book in the saga are just part of the dramatic process. And, being perfectly honest, that’s exactly the case; everything that’s happened in the story since the first film, hell, the first novel, just served to lead audiences up to the triumphant final moments of the story. All of the tragedy, horror, laughter, love, and thrills brought us here. With Deathly Hallows p2 in the books, there’s a natural desire to look back over the novels and the movies in total and take in the whole scope of the combined franchises. Really, Harry Potter‘s success– as product and as art– can be attributed to how the people who set the books and movies in motion held the line, from J.K. Rowling, who put pen to paper more than a decade ago and created a worldwide literary phenomenon that hasn’t really been matched since, to Christopher Columbus, who couldn’t have known just how perfect his casting choices were at the time of the first movie’s production in 2001. Make no odds about it, it’s kind of incredible to reflect on how we got to Deathly Hallows II and thoroughly sobering to realize that after fourteen years, it’s all over, said and done.”

13) 50/50: “…as the picture progresses and Adam’s story is told, it’s quickly apparent that Levine isn’t interested in telling a straightforward tear-jerker meant to tug at heartstrings– instead, he’s mining humor out of his protagonist’s ordeal.  For all of its emotional thematic stuff, 50/50 is one of the funniest movies you may see in a theater this year, so long as you’re receptive to the blunt, crude, and unapologetic humor so central to the stylings of Goldberg and Rogen (who both produced the movie along with screenwriter Will Reiser, upon whose life the movie is loosely based), as well as the referentialism which defines so much of not only comedy of today but cinema as a whole (e.g. an absolutely devastating Total Recall reference). 50/50 never shies away from being vulgar (don’t ask Kyle what he really uses that razor for) but  there’s something refreshingly upfront about many of the film’s punchlines– whether they’re aimed at Adam’s cancer, his relationships, or anything else– and its general attitude as well. This is thoroughly human material; nothing here is sugarcoated or watered down, from the jokes to the raw emotional beats.”

12) Bellflower: “Between their anger and the film’s decidedly indie roots, Bellflower turns out to be something of an unexpected one-two punch. Glodell’s picture feels like a bizarre marriage between the mumblecore movement, distinguished by films like The Puffy Chair, and more disturbing low-budget shock cinema. For some, the coupling may be problematic; the film’s opening minutes forecast its violent finale, but in large part Bellflower functions as something of a stripped-down exercise in human romantics lovingly coated with an overlay of genre homage. Apart from occasional glimpses into the psyches of Aiden and Woodrow– windows of opportunity that continue pushing the film into darker territory– Bellflower‘s central love story renders it surprisingly sweet. As Glodell leads us into the film’s final 40 minutes, though, the rug is yanked from underneath us as Bellflower revels in getting its hands dirty.”

11) The Trip: “The Trip‘s primary, or perhaps ideal, audience may be comprised of frequent adherents of the Top Chef and aficionados of wry British wit. Michael Winterbottom’s film spends most of its time with its two stars, Steve Coogan and Rob Brydon, but the acclaimed director is playing loose enough here that he feels safe sneaking off to the kitchens of its high-dining establishments to depict the culinary process before revealing the fruits of the cooks’ labors as both comedians demonstrate a low propensity for articulate food criticism. In fact, I feel secure enough to allow for a hypothesis: if, while you are watching The Trip, you are not laughing, then you are salivating. Depending on which endeavor you’re more inclined toward, your mileage may vary in either category.”

Keep an eye out for part two of A Constant Visual Feast’s year-end wrap-up later this week!