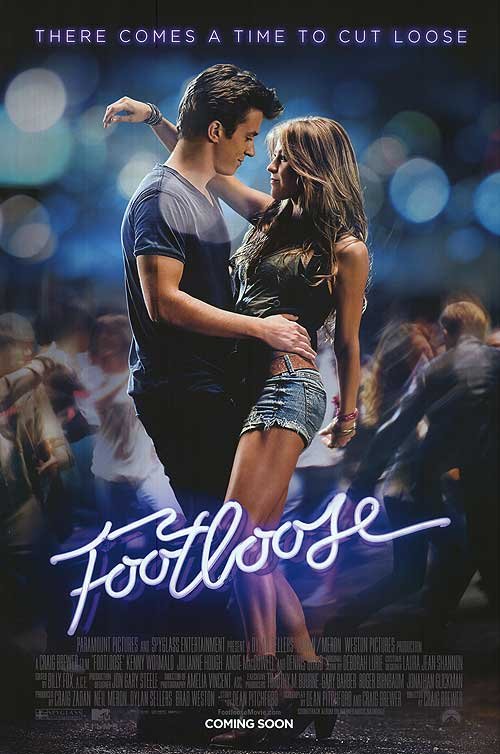 It’s known that certain varieties of genre movies tend to be bestowed enormous levels of leeway in the departments of story and structure so long as their central drawing elements are done well. Take modern inventively gruesome and envelope-pushing horror films, which gorehounds may rate based on the creativity of their wanton visceral displays and how far they go. Or maybe a kung fu film, which could be considered a classic even if all of the cast’s and crew’s combined efforts are funneled into making the fight scenes look spectacular. Most of these– save for the films that don’t sacrifice compelling storytelling for their niche– are mediocre by any other applied standards, but their shortcomings are overlooked so long as they deliver on the promise of their heritage.

I say all of this because after seeing Craig Brewer’s attempt at updating 1984’s Footloose and reflecting, I’m impelled to confront my evaluative habits for genre flicks. Certainly Footloose isn’t “genre” in the way that an Ip Man or Human Centipede is “genre”, but clearly it exists as a showcase for one thing and one thing only– dancing. If we go to slasher movies to see annoying teenagers get picked off by a silent and unstoppable killer, and action movies just to see wildly imaginative and impeccably choreographed fight sequences, then logically we go to movies like Footloose to see their casts dance.

And dance they do. Well, in fact very well, well enough that it’s almost worth sitting through everything else just because of how good the dancing is– if, of course, you’re on-board with watching actors in their early twenties bump, grind, shake, groove, slide, glide, and generally display a marriage of body and mind most never achieve. If that’s not really your thing* then in good conscience I can’t encourage you to buy a ticket, because excellent dancing filmed smartly by a great director is about all that Footloose has to offer; the film comes down to the fundamental question of what you’re willing to sit through to experience those signature, genre-defining elements.

Brewer’s film uses Herbert Ross’ original picture as a basic blueprint, but changes much in the saga about a small town’s social war against minors dancing unsupervised in public. This time around, fictional Bomont exists in Tennessee, and Ren McCormack hails from Boston– because apparently Boston’s the misfit/bad-boy capital of the US. Fortunately, Kenny Wormald’s a bona fide Beantown resident hailing from Stoughton, and along with authenticity he brings the kind of cocky charisma to the role that the character demands. He’s no Bacon, but he’s got a pulse stronger than those of most of his fellow cast members– and besides, he’s here to dance**.

As the story goes, Ren arrives in Bomont to live with his aunt and uncle (Kim Dickens and Ray McKinnon in a bizarre and unexpected Deadwood reunion) in the wake of his mother’s passing; he finds that the town has strict curfews and stricter enforcement of draconian laws against young’ns gathering and dancing. Like any rebellious city boy might, he becomes enamored with a rebellious local girl (Julianne Hough) who happens to be the daughter of the local reverend (Dennis Quaid) who helped influence the ban on dancing, motivated by the death of his son and four other teens three years prior in a car accident following just such an example of public boogieing. Naturally, Ren rejects these conservative notions of modesty; generational skirmishing commences.

It’s a thin, slight narrative. Realistically Footloose isn’t made for someone like me, though, so take these words well-salted. For teen sets, there’s a certain romance to youths fighting against authority represented by parental figures, but the script clearly tilts toward making the former group look righteously sterling and cool while the latter comes off as stodgy, obstinate, and frankly square. Brewer’s a director with a deft hand who here appears to have gotten his mitts around a Smithfield ham; there’s really nothing subtle about the film’s message whatsoever, which perhaps is too much to ask for.

But in the comparison between Footloose and narrowly-focused, specialized genre films bent on celebrating one particular cinematic element, Footloose fails ultimately because it’s strung together nonsensically. There’s a distinct sense that big chunks of footage are missing, cut perhaps to reduce the film’s running time (a bloated 113 minutes as-is), but if Brewer and the studio needed to make up time there are a number of thoroughly useless moments that go nowhere that could have been cut, rather than major plot moments– most of all town hall voting against Ren’s motion to repeal the dancing ban. The film’s proclivity toward fluff hamstrings it in the telling of the story; after a point your task as a member of the audience is to endure until Footloose arrives at a dance scene.

To Brewer’s credit (and choreographer Jamal Sims) there’s some fancy footwork presented here. More importantly it’s captured very, very well, who very shrewdly takes great pains to show off the aforementioned footwork in meticulous detail. Rather than give us a commotion of pivoting and hip-swivels, the Hustle and Flow director very much translates all of the hard work that the dancers put into their movements and mixes his own energy up with theirs; it’s a potent combination that can win over even a cynic such as myself.

It’s not enough to save the movie or give it crossover appeal, and neither are the performances, which are frequently stiff, like Quaid’s, or inconsequential, like MacDowell’s. Wormald’s a newcomer– this is, as far as I know, his first starring role– so he’s new at being a leading man, but he’s got charm to spare and it’s kind of hard not to root for him. On the other hand, I can’t say the same for Hough, but she truly comes to life when she dances, so I have to criticize her with one hand and praise her with the other. There are some bright points, mind– Miles Teller as Ren’s dance-handicapped redneck pal is genuinely warm and funny– but little else to uphold the work of either of the leads.

Ultimately, though, no one comes to a movie like a 2011 reinvention of Footloose to see great acting or great storytelling. Adjust your expectations accordingly, and you won’t be disappointed.

**Fun aside: My mother-in-law (who attended the screening with me) and I sat next to a woman who happened to be a former instructor of Wormald’s when he was a lad. Small world, right?