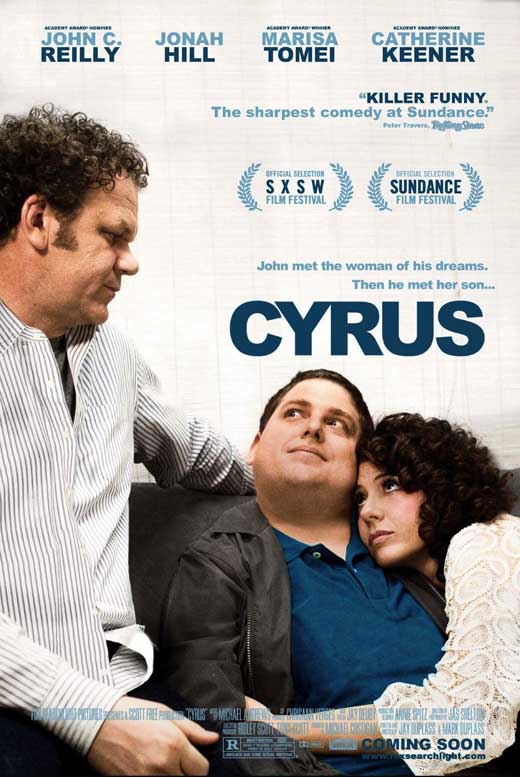 Can we really associate mumblecore to indie filmmaking any longer and remain completely honest after 2010’s Cyrus? While the movement-essential Duplass brothers, Mark and Jay, don’t relinquish the personality and character of the cinema that they champion, they do work with a cast that strikes a watermark far, far above what past entries in their body of work have been able to muster in terms of pedigree and exposure. When your independent picture packs the likes of John C. Reilly and Marisa Tomei alongside players like Jonah Hill, you’re no longer wading in actor obscurity or avoiding name recognition. Are the Duplass’ making an indie, here, or are they just enjoying another exercise in realism?

I’m inclined toward the latter, though I think in the end that the distinction of being “indie” or not is rather irrelevant to the film’s overall quality (but perhaps one worth exploring in its own piece). Cyrus is a slight picture, and likely not anything that the Duplass’ will be recognized for when pored over by film scholars years from now, but it’s very, very good and worth seeing on its own merits. For my own part, Cyrus shows me what Humpday— my only other Duplass encounter– simply couldn’t, namely that the sibling duo actually can tell a story that’s not constipated, and fully explore their characters and themes without falling short. Minor or not, this is a sweet, thoughtful film with a wonderfully awkward sense of humor and some very dressed down, grounded performances by a well-rounded cast of talented actors.

Cyrus‘ hero is John (John C. Reilly), a divorced man who nonetheless maintains a functional and amicable relationship with his ex-wife (Catherine Keener), even leading up to her marriage to Tim (Matt Walsh); though they’ve been separated for nearly a decade, John remains romantically unattached. Until, that is, he meets Molly (Marisa Tomei), and we all know what happens to lonely men who meet a Marisa Tomei character– they fall in love with her. John’s no different, and a relationship begins; then John meets Molly’s son, the titular Cyrus (Jonah Hill), and a battle of wills ensues between the two men in Molly’s life as Cyrus actively seeks to break the pair up.

Mumblecore, as a filmmaking aesthetic, generally is defined by its examination of the emotional issues of characters (usually twenty-somethings), and often comes packaged with the sort of muted comedic beats that might pass over audiences looking for more traditional punchline queues. In that respect Cyrus falls within genre expectations and doesn’t go out of its way to reinvent the wheel. As John and Molly grow closer, it becomes apparent that Cyrus himself isn’t acting out against their coupling arbitrarily, and the conflict between boyfriend and son is underscored throughout by the sort of maladroit laughter one might expect from these sorts of films; we chuckle along as the Duplass’ reveal how close Cyrus and Molly are (they shower together), and guffaw when Hill and Reilly quietly bicker with one another behind the unsuspecting Molly’s back.

But a movie doesn’t need to totally flip its genre upside down in order to have some intrinsic worth. As much as Cyrus is fairly typical in terms of structure and attitude, it’s the quality of writing and performance that ultimately elevates it above other similar pictures. Maybe the key element here is the narrative arc of John, the film’s true protagonist, and the growth he experiences not just through his connection with Molly but through his conflict with Cyrus. Cyrus needs to learn how to operate as a functioning adult in society; John needs to relinquish his despondence and acquire some empathy. In other words, they both need each other, regardless of how badly they’d like to take one another down.

The core trio of performers driving Cyrus go a long way toward making the film stand out from other mumblecore fare; Reilly and Tomei both seem to get better and better as time goes on, while Hill is inclined toward a particular mode of comedic acting that he veers away from here. Tomei sort of takes a backseat to her male co-stars, which is sort of a shame, but she performs fantastically as she spends most of her screen time trying to reconcile her attraction with John and her bond with her son– and, remarkably, get across her sense of desperation at seeing these two male figures she cares so much for clash with each other. Meanwhile, the meat of the show belongs to Hill and Reilly; Reilly brings his loveable nice guy charm to his role while maintaining an undercurrent of loneliness that allows him to shed his more affable side and bring some very genuine anger to the table. Hill, for his part, reigns himself in and plays outside of the sarcastic wiseguy box he’s constructed around himself in the short span of his career. They make an enjoyable on-screen match together as they butt heads over the affections of Molly.

All the while, Mark and Jay assert themselves in the story by using the same stirring movement of the camera employed in Humpday. Ostensibly this adds a veneer of realism to their visual narrative; as the camera shakes and zooms in, we’re meant to feel as though we’re watching real life unfold in front of our eyes. The actual effect, though, is something a little bit more dreamlike and lyrical. For as real as Cyrus‘ may feel on a thematic level , the cinematography suggests the opposite case. Maybe we’re watching John’s dream come true before our eyes as he falls in love with Molly, and maybe Cyrus represents John’s sort-of nightmare, a challenge to his happiness that he has to overcome. I admit that that’s a bit of an artsy-fartsy read, perhaps, and ultimately Cyrus does achieve overall a sense of true-to-life storytelling through strong storytelling and honest performances. More than that, though, the film proves that the Duplass brothers are capable of articulating their vision fully and effectively– that they can successfully tell the story that they’re trying to tell– and should give any of their detractors or critics (myself included) reason to give their body of work another chance.