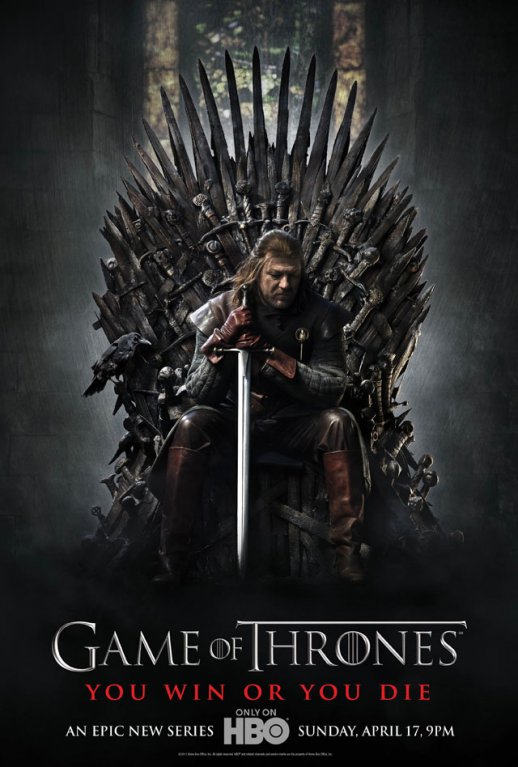 In this exciting installment, we discuss A Golden Crown, You Win or You Die, and The Pointy End.

With episodes six, seven, and eight of Game of Thrones, Benioff and Weiss have brought out the proverbial fan, ostensibly so that the shit introduced in the above trifecta of episodes has something to hit. And hit it does; if we view the first five episodes as the build-up to the story’s bloody, massive, and epic climax, then everything after can only be considered payoff as characters suffer the consequences for their actions, people begin to die, and the participants of the titular game make their plays with devastating, tragic, and often violent results. Ned unintentionally discovers the truth that killed the former Hand of the King, Viserys receives his “crown” and the Dothraki invasion of Westeros becomes imminent rather than a far-off dream, and the deep-rooted contempt Houses Lannister and Stark share for one another blossoms into nation-wide strife as both families rally their banner men and march to war with one another.

Meanwhile on the Wall, one of our audience surrogates witnesses firsthand what we’ve known since the opening to Winter is Coming— that the White Walkers are very, very real, and do not exist in hushed whispers and old stories meant to frighten young children. In one instant, the feared race snaps from being a distant danger to a tangible threat. When it rains, it pours, they say, and now the nation of Westeros is in no shortage of impending dangers to its safety. The series has bounced back and forth between each of these locations since the first episode, and with A Golden Crown, You Win or You Die, and The Pointy End, the series really ratchets up the tension as fate seems intent on devastating the kingdom entirely with war brewing on all fronts.

In this stretch of the series, it’s not simply the threat of war that promises a landscape  run red with blood but also the maneuverings of the political players, chiefly Cersei Lannister and Littlefinger, as they make their respective moves and Ned reacts in kind. If you considered the Lannister family name to be synonymous with deviousness before then you’ll probably change that word association up to “treacherous” now. Queen and Lord attempt to out-plot one another, and the personal grudges between the two houses ends up leading to a conflict with far greater reach; their personal tete-a-tete underscores a theme of the story since the beginning, that the actions of few can impact the lives of many, which is more true in You Win or You Die than the earlier half of the season. Ned’s well-intentioned, but his stubborn and unbending code of ethics leads to the mass-slaying of his personal retinue in King’s Landing, and proves to be the final slight the Stark family will bear as eldest son Robb leads his army of Northmen South and to battle.

In fact, much of the plot development of these episodes lands right under the umbrella of that exact theme. Ned’s own actions (and of course, we won’t forget Cersei’s contributions here) bring death to his loyal retainers and servants, but arguably the actions of the now-late King Robert have longer lasting consequences. Apart from his ordered assassination of Daenerys– which fails, and leads the mighty Khal Drogo to swear to cross the sea with his massive army and invade Westeros and reclaim the Iron Throne for her– his own recklessness kills him, and puts the sadistic Joffrey on the throne in his place. And all so Robert could kill a wild boar. The repercussions of both characters’ respective choices will undoubtedly be felt long into the next season and even beyond; the swift and sudden excision of their presence in the progression of plot opens the door for the heavies to do as they will unchallenged and unrestrained. Ill times lie ahead for Westeros with the Lannisters in power.

Even so, one can still say with a straight face that Benioff’s and Weiss’ (and Martin’s!) universe is one ruled by moral relativism. If Game of Thrones has one strength apart from the skill with which the writing team condenses, trims, parses, and edits the source material to fit within the mold of a television serial, it’s the deftness with which it imparts humanity on its characters. Cersei remains nefarious, but knowable– she’s a woman who would do anything to protect her children, even play games with the stability of an entire nation (though her bid for control of the throne isn’t just about ensuring the safety of her family, for sure). And she’s a wounded soul, someone who loved a man who didn’t, couldn’t, love her back. Lena Headley’s magnificent portrayal of Cersei allows her to play the antagonist, but one nevertheless wonders how things may have gone differently had Robert treated her tenderly as a husband instead of wallowing in his own grief over the loss of his true love, Lyanna Stark.

That sense of ambiguity is felt across the board. Questions arise about the intentions and genuine character of Alfie Allen’s Theon Greyjoy, ward of House Stark and son of the Lord of House Greyjoy, ones that may yet be answered before the finale. And I can’t be the only person who felt a little pity for Viserys, who stood out as one of the series’ most wantonly vile and unsympathetic characters, as he faced his impending demise at Khal Drogo’s merciless hands in one of the series most tense and discomforting moments. It’s hard not to feel a little bad for the guy– he’s gone mad over the span of his young life, waiting to obtain the means and agency to reclaim the Iron Throne that by rights is his. Again, as he meets his fate, one wonders.

A Golden Crown, You Win or You Die, and The Pointy End are all marked by the same quality of acting we’ve enjoyed over the course of the series. Game of Thrones‘ remarkable cast is a huge part of the reason the show is so worth tuning back into week after week; across the board, all players involved, be they principle or supporting, have created a host of unique and colorful characters in this fantasy world who we love to see on screen– even the most diabolical ones. There’s distinct pleasure in watching these characters, from the noble but doomed Ned Stark to the unctuous and two-faced Littlefinger, week in and week out; bereft of that this might just be a solid show, rather than a great, memorable one. Between the Headleys, the Dinklages, the Beans, the Clarkes, and even the Momoa’s (and yes, I firmly believe that he’s genuinely excellent here– and if you disagree, his savage and emotional vow to conquer Westeros for Daenerys would beg to differ), there’s never a moment where someone interesting isn’t on screen captivating our absolute attention.

Baelor is in the books, too, though you’re going to have to wait until after the final episode, Fire and Blood, to get my verdict on that one too. (Possible spoiler: I liked it a lot.) One episode remains, and then we must wait in anticipation of the second season. If the drama of these episodes tells us anything, it’s that the finale should go above and beyond with spectacle and jaw-dropping quality.