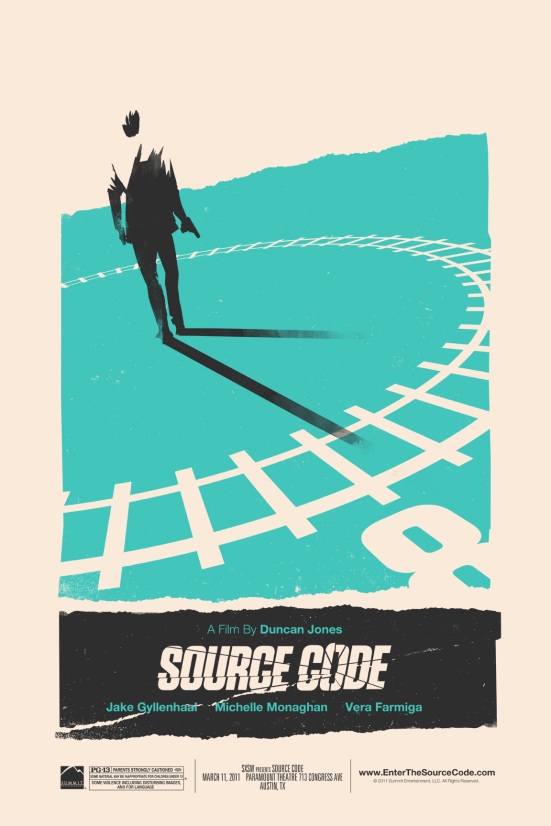 Duncan Jones is quickly making a reputation for himself as a director whose films don’t easily lend themselves to open and casual discussion. Between 2009’s Moon, one of the most impressive debut features of the last decade, and Jones’ latest offering, Source Code, a writer is hard-pressed to perform even a cursory review of the talented director’s work without giving away too much. Outside of a quick and dirty plot description, I’m reticent to divulge further details; as with Moon, I suspect Source Code works best if experienced with as little foreknowledge as possible.

In short, you need to know nothing more than the basics; that Colter Stevens (Jake Gyllenhaal) has been tasked with discerning the culprit behind a terrorist bombing of a Chicago commuter train to prevent an even larger attack the same day, and that the means through which he carries out his mission is the titular computer program, which allows him to inhabit the body of a specific passenger aboard the train during the last eight minute’s of the man’s life. Aiding him in his assignment are handlers Goodwin (Vera Farmiga) and Dr. Rutledge (Jeffrey Wright); within the Source Code, he meets and becomes quite taken by Christina (Michelle Monaghan), whose life he determines he must save despite knowing she’s already dead. If you’re motivated by a need to know any more than that, it’s not in anyone’s power to stop you from spoiling yourself, but don’t say nobody warned you against doing so.

With Source Code, Jones relinquishes the scrappy, low-budget charm and minimalist sensibility of 2009’s masterful Moon in favor of a glossier, more mainstream sheen and a larger scale. None of this turns out to work to the film’s detriment; an increased presence of mainstream actors and shinier, improved production values don’t necessarily add anything to the meat of the picture, truthfully, but extra crowd appeal isn’t a bad thing when the storyteller is so socially minded as Jones.  If the film’s exterior doesn’t match that of the fledgling director’s previous work, the heart driving it is very much the same– just as with Moon, Source Code‘s primary interest lies in conjuring up a nifty bit of nonsensical pseudo-science and using that to frame an examination of issues of ethics and morality as Stevens learns more about the eponymous program and his mission.

But that’s as much family resemblance as the two movies share; Jones is playing with more money and in a very different sandbox this time around, building up a sleuthing sci-fi thriller rather than a somber character study. He handles the genre transition with impressive adeptness, delivering a taut and tense plot as the wide-eyed Gyllenhaal scrambles to unearth clues and information eight minutes at a time. It’s a plot device that might immediately scream Groundhog’s Day to some, but that comparison does a disservice to Source Code (and by extension, Jones’ efforts in telling the story) by oversimplifying the film on a fundamental level and disregarding its central mysteries, from the identity of the train bomber to the nature of the source code to…well, I’ve said enough already.

If Jones gets one thing right with his film (and he gets far, far more right than just one thing), it’s that fine balance struck between  an exploration of big ideas and concepts and crowd-pleasing entertainment. Rare is the filmmaker who can pull off both feats at once, but here, Jones makes it look like a cinch. If you have any reservations about how much your mileage will vary with Source Code, fear not; it’s smart enough to satisfy the hardcore science fiction fans and cerebral cineastes, and it’s clever and resourceful enough to entertain those just looking for an exciting time at the theater. Jones knows how to move the story forward without skimping on detail and while asking essential questions– which drive his narrative rather than simply act as supplementary material– and he knows how to keep the plot fresh no matter how many times Colter gets pulled in and out of the source code (and the audience with him).

Jones also understands precisely what “reveal” means, and at this point I’m risking giving away a little too much of Source Code‘s secrets. (Translation: I wouldn’t think badly of  readers who chose to skip this paragraph.) But Jones brings a subtle hand to the art of the twist, and neglecting to mention his skill in that regard seems shoddy. Too many movies are written around their twists, and they feel forced and inorganic as a result; this is a sensibility which Jones rejects outright by instead writing up to his twists. And frankly, Jones doesn’t use twists as much as he carefully builds toward the aforementioned reveal. Twists come out of nowhere; they’re tricks, filmmakers pulling the wool over their audiences eyes. Reveals, on the other hand, speak to a mystery introduced in a narrative, answering established questions. Jones knows how to get from point A to point B without insulting his audience and has a firm grasp on how to build up to a big revelation without tipping his hand and blowing the whole thing. It’s harder than it looks, and that Jones has such a mastery on this delicate storytelling technique speaks volumes to his skills as an artist.

He’s not the only talent on display here, of course. Seeing Jones work with an actor like Jake Gyllenhaal instead of someone like Sam Rockwell marks a notable change of pace immediately; they both have wildly different skill sets, which is not to comment on their respective acting ability whatsoever. Gyllenhaal ends up proving to be as perfect a fit for Source Code as Rockwell was for Moon; he’s smart, using logic and reasoning to achieve his goals instead of brute force or action prowess, but we know he means business when he wields a weapon. Colter is a rare hero type in that respect, and watching Gyllenhaal bring this unconventional variant on the character archetype to life is a complete joy. He’s supported by two excellent actresses in Monaghan, playing confused fragility perfectly while making it easy for us to see why Colter falls in love with her, and Farmiga, whose emoting is defined by nuance and who can speak volumes with the slightest change in her expression. Wright has maybe the most difficult task of the lot– Rutledge, the heavy, could just be a cartoon character, and while Wright comes close to twirling his mustache, he’s able to translate the scientist’s perspective to us and keep him human no matter how callous he appears.

Source Code is another home run for Jones. Somehow, he manages to operate in the same vein as Moon while introducing a new aesthetic into his work, which might not be to the tastes of some of that film’s enthusiastic supporters but doesn’t yield any tangible negative effects on the overall quality of the movie. Seeing a filmmaker like Jones walk a fine line between thrilling his audience with spectacle and intrigue and also making statements on issues both political and ethical for the rest of his audience to chew on. Most of all, with Source Code he has further carved out a voice for himself as a contemporary director, tying together common themes and ideas between his admittedly limited body of work and firmly establishing just what it is that impels him to create movies in the first place.