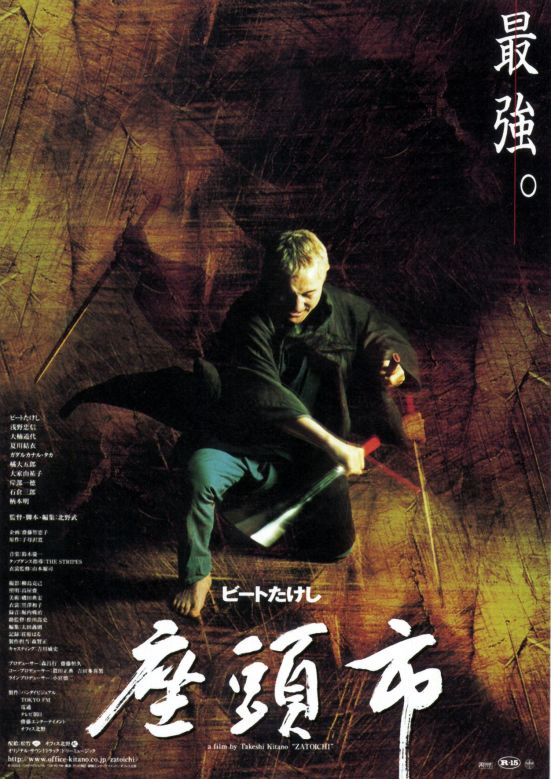 To describe Japan’s Takeshi Kitano (or Beat Takesi) as anything other than “versatile” is outright unthinkable. While frequently known and celebrated for his forays into crime dramas with a series of films involving cops and yakuza to his credit– Brother, Sonatine, Hana-bi, Violent Cop— Kitano has displayed an unwillingness to be pigeonholed as a participant of just one genre throughout the course of his career, interspersing his grittier and more violent pictures with affecting and often highly stylized and artistic films replete with comedy, whimsy, and subtle introspection (and sometimes a combination of the three), ranging from Kikujiro to A Scene at the Sea. His myriad cinematic proclivities make him hard to pin down as a filmmaker, but each of his movies feels intimate and personal no matter the content; no matter what genre he’s invested himself in, first and foremost among his interests lie with his characters’ individual narratives.

Which makes 2003’s Zatoichi something of a departure from the rest of his body of work, since the film is neither personal nor introspective. This isn’t to say anything bad about the film, which stands among his most polished and refined efforts, but he’s not digging terribly deep here, instead trying his hand at one of Japan’s most staple and well-known genres– chanbara, sword fighting movies that constitute a sub-genre of the jidaigeki period drama– as both a director and a leading man. Coupled with that, in making Zatoichi Kitano is seizing the reigns of one of his country’s most beloved franchises, a series focused on a character of the same name, starring Shintaro Katsu as a wandering blind masseur who possesses godlike prowess in iaido (quick-draw sword fighting) with his trusty cane sword. In other words, Kitano’s standing up to a legacy comprising twenty six films* spanning nearly thirty years and featuring legions of wicked men cut down by the eponymous character’s justice. And maybe that’s enough.

The film’s set-up is simple enough, and should recall the likes of genre classics such as Yojimbo wherein the titular hero wanders into a town oppressed by crime and ultimately cleans house, making life better for everyone (except for criminals, for whom that precious commodity is ceased swiftly). Would I be spoiling Zatoichi by noting that the townspeople are so chuffed over the freeing of their hometown that they all have a huge dance party at the end? (Really.) Probably not. What do these movies consist of? Bad guys get punished, and the lone swordsman lives to fight another day and presumably keep bad guys in other terrorized rustic hamlets from enjoying that very same privilege. It’s formula, and a highly successful one to which Kitano faithfully adheres– for the most part. Put bluntly, it makes for thrilling and energetic entertainment done well by one of Japan’s best contemporary directors and stars.

The film’s capstone celebration breaks away from the norm slightly, and arguably so too does the film’s surprising number of punchlines. If anything should dispel Kitano’s undeserved status as a grim, gun-and-violence fixated misanthrope**, it’s his sense of humor; he’s cheeky, endlessly and shamelessly so, and he very shrewdly chooses not to lose that attribute in his handling of the character and the story. Often, Zatoichi stops being about the blind samurai’s campaign against the gang taking over the town and the build-up to his eventual showdown with their hired muscle, a lethally talented and noble ronin (Tadanobu Asano) struggling to care for his dying wife; in these moments of halting it instead is about laughter and some outright silliness, from men who attempt to cross-dress so that they can be beautiful like one of the film’s geisha sisters to the film’s villain making a funny face at a child to elicit laughter. (Hint: it doesn’t work.) Zatoichi isn’t especially heady stuff, so the inclusion of humor doesn’t seem intended to lighten the proceedings as much as to keep them feeling alive.

It works; Zatoichi boasts nary a dull moment, making Kitano’s seamless blending of his own brand of high artistry into the film’s plot that much more impressive. The crisp, grounded, and intentional cinematography and muted color palette keep Kitano’s work visually in-line with its predecessors, but it’s the stylistic touches that make Zatoichi undeniably his, from bright red CGI blood splattering across walls and spraying out of Zatoichi’s outmatched opponents to a much less silly dance scene which showcases some truly excellent editing as a character in the present dances in coordination with their past self. (If it sounds abstract on paper, it’s a lot more elegant on celluloid, and you’ll know it when you see it.) In short, the film is a cocktail mixing a perfect balance of each of Kitano’s propensities as an entertainer– Kitano the tough guy, Kitano the comedian, Kitano the artist, and even Kitano the humanist, for as much as he’s telling a story before he’s exploring his characters, it’s clear that he has compassion for his protagonists and their circumstances. In the hands of another director, maybe the disparate elements of this cinematic combination would clash. Under Kitano’s gaze, they compliment each other harmoniously, quietly but firmly stating his mastery both behind the camera and in front of it.

**Maybe this is going a bit far, but it’s hard to argue that Violent Cop and Brother celebrate life, particularly the former.