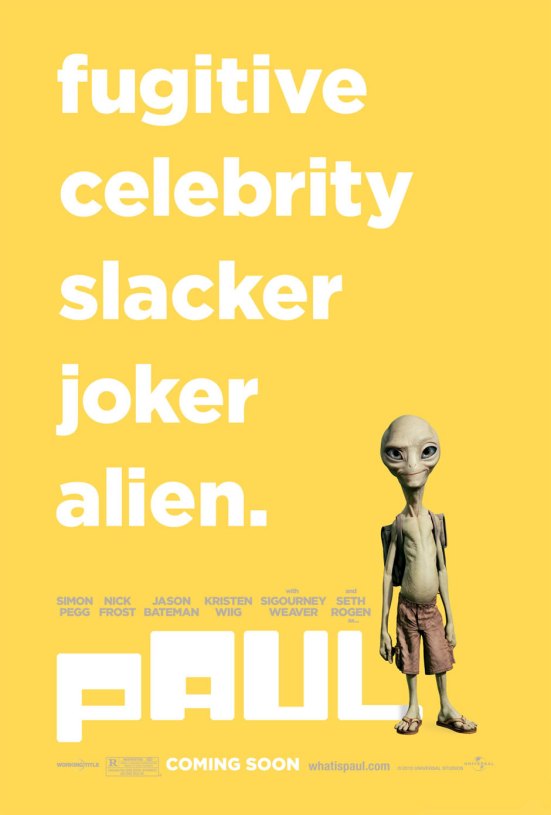 Simon Pegg and Nick Frost at this point should be considered the premiere comic duo of our time. Is that fair to say?  These English lads– one of their country’s most beloved exports– constitute a twosome which functions organically and a dynamic that requires no employment of shtick to work; they’re funny, individually and together, and their shared humors are bolstered by an undeniable, wholly genuine bond between them. In other words, they play friends so well because they’re actually friends, handily explaining the sense of veracity so inherent to their chemistry on-screen and off– and it’s almost impossible to imagine either of them appearing in a film without the other at his side.

Pegg and Frost make their third venture together in Paul, which also marks the first picture both have starred in not directed by their usual partner-in-crime Edgar Wright. Greg Mottola, the man behind Superbad and Adventureland (and not quite the auteur that Wright is), is at the helm here instead, though the absence of Wright’s wizz-bang theatricality and editing sorcery should be no reason to fret for the well-being of both the stars and the film in total. Mottola has proven himself adept with the currencies of humor and warmth, so the idea that he very well may be worthy of directing Frost and Pegg isn’t that hard to swallow, especially when Paul shares such a strong kinship with the two films that helped both actors establish a foothold in American cinema and gain greater visibility amongst the country’s audiences . (Being Shaun of the Dead and Hot Fuzz.) The only question is whether the alchemical combination of Frost’s and Pegg’s magical on-screen relationship, Mottola’s direction, and a geek-centric and frequently referential plot actually makes for a good movie.

In a word, yes. In more than that, wow, does Paul ever hit a home run.

Think of Paul as E.T. through the lens of the Apatow gravy train, of which Mottola should be considered at least an honorary member. It’s interesting to note that there are not only two riffs on Steven Spielberg’s beloved 1982 picture coming out this year (the other, June’s Super 8, being the lovechild of J.J. Abrams, who wrote and directed it, and Spielberg, who produced it), but that they’re both drastically different in attitude and worldview than their ancestor. Paul isn’t a dark, violent, or wholly negative movie– Super 8 looks to fit that bill pretty well– but it’s incredibly cynical at times even if it does possess a degree of E.T.‘s optimism, and of course it’s far, far more vulgar and foul. Put plainly, Paul is what would have happened if Elliot and his siblings and friends had all been in their late twenty-somethings/early thirty-somethings instead of children.

In a nutshell, the film follows Graeme (Pegg) and Clive (Frost), a couple of geeks visiting the States from England, taking in the San Diego Comic-Con and hitting the road in an RV to tour American extraterrestrial hot spots; by happenstance, they wind up providing shelter and transport to the eponymous little green man, a cigarette-smoking, pot-bellied, wise-cracking, laid-back chap who sounds very much like Seth Rogen. Guess what? He wants to go home. Of course, it’s not that simple– his presence attracts attention from sources harmless (Kristen Wiig, in the role of a closed-minded and naive but sweet-natured Southern Bible-thumper stereotype) and lethal (Jason Bateman, an MIB type hell-bent on finding Paul), leaving our two outmatched heroes as Paul’s best bet of making it off of our planet.

Maybe it’s unsurprising that along their journey, callback upon callback is made to innumerable iconic science-fiction properties, from the Alien franchise to Star Trek to Star Wars. Paul‘s thematic skein has an enthusiasm for all things geek woven into its fabric in much the same way as Wright’s Shaun and Fuzz; it’s a movie made by geeks, for geeks, and that love of the genre from its intellectual junk food to more high-minded endeavors reads throughout the entire narrative. As such, Paul might at first sound like a bit of  a hard sell– after all, who’s going to pick up on the references* outside of participants in the sub-culture?– but Mottola knows how to keep from alienating people who aren’t in on the joke (if you’ll pardon the term; seriously, I’m not trying to be cheeky at all here) by keeping the majority of the laughs plot-based rather than reference-oriented. In all honesty, most of the laughs originate naturally from what’s happening on the screen, and the ones that stem from a shoe-horned reference often aren’t among the film’s best jokes. It’s a great balancing act between speaking to the film’s primary demographic and, well, everybody else, one Mottola handles pretty deftly even if the greatest joy to watching Paul lies in how joyfully it embraces its roots and influences.

Aside from that, Paul is about Graeme and Clive coming face to face with the object of their obsession and fascination. It’s geek wish fulfillment, such as it is, only their wish-come-true scenario doesn’t go quite how they imagined it would. Paul appears to question how people might actually react upon coming face to face with the fantasy that they want to believe in and hold onto; for Graeme, adjusting to the alien’s presence comes easily, though he never fully sheds his disbelief even when he’s calmly explaining to Clive where their hitchhiker’s home planet is located. Clive, on the other hand, struggles for a number of reasons– jealousy of Graeme’s rapport with Paul, and disappointment in his first close encounter differing wildly from how he thought it might play out. For both earthlings, the abrupt introduction of reality bursts their bubble (which can also be said of Wiig’s character, whose world view is turned upside-down by Paul’s existence).

I could talk at length about how great Frost and Pegg are here, but I’ve already made my position on them pretty clear. For the sake of brevity, they’re wonderful here as they always are, riffing off of one another and lending the long-standing friendship between Graeme and Clive honesty and plain old realness. The good news is that everyone else delivers as well, most of all Rogen and Wiig. Rogen, much like Paul‘s leading men, is doing his usual thing here, and also like them, he does it very, very well. Few can deliver a cutting one-liner without sounding cruel quite like Rogen can, and even fewer are the actors who can instill their characters with such an everyman congeniality. Rogen plays these qualities perfectly and makes Paul the most rational, easygoing character in the film, which of course is part of the joke; his performance, combined with the creature FX work done by Spectral Motion**, make for a vocally and visually compelling character. Wiig, meanwhile, plays Ruth as someone experiencing an awakening; her eyes are opened to a world in which the sins her father (John Carroll Lynch) taught her to swear off aren’t quite so depraved after all. Wiig approaches most of her roles with a matter-of-fact attitude that almost seems antithetical to the idea of making people laugh, but here it works with the character’s inexperience with vulgarity and sexuality.

Paul ultimately succeeds by being exactly the kind of film it’s ribbing. In the same vein as the films which helped establish the Pegg/Frost connection, Paul exists as an alien film first and a comedy second; Mottola and his stars (who also wrote the picture) are more interested in mining laughter from their film rather than forcing it, beginning with the basic structure and figuring out the punchlines from there. For the actors, Paul constitutes yet another outstanding together; for Mottola, it’s another solid notch on his belt, though there’s no question as to who can be credited for the film’s excellence.

*Frankly, the most obscure reference comes from a joke in the climax that’s based on Bateman’s character’s name.

**I believe it’s Spectral Motion, anyhow. I could be mistaken, though, so corrections are welcome.