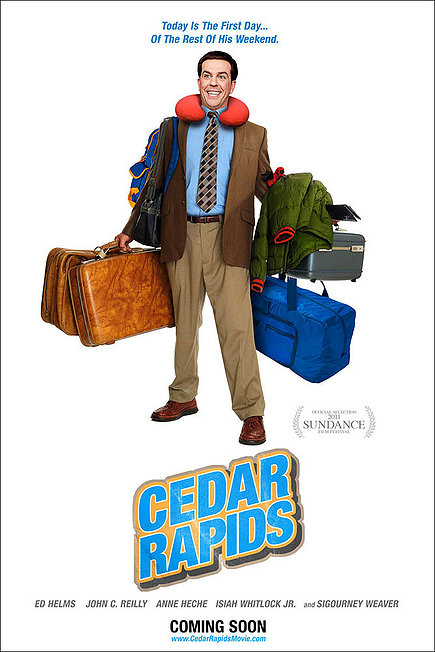 Ed Helms’ career is defined by a relegation to supporting roles and a specific casting type– whether intentional or otherwise– that does not on its own merits suggest leading man potential. Unless the film in question features a leading man that plays perfectly to that type, which Tim Lippe, insurance salesman and poster child for arrested development, does. And so now we enter the phase of Helms’ professional life where he can be more than just a sidekick or background character, bringing his lovable, awkward dorkiness to the forefront in director Miguel Arteta’s latest film, Cedar Rapids, a neatly packaged little comedy that has no business being as charming or outright funny as it is and yet works like gangbusters thanks to some clever manipulation of popular raunch-comedy tropes and character stereotypes on behalf of Arteta and script writer Phil Johnston.

Helms’ aforementioned insurance jockey Tim, an emotionally underdeveloped adult man, has spent his life selling insurance packages to people in his small Wisconsin hometown, is currently dating his former middle school teacher (Sigourney Weaver), and knows nothing of the world outside of the city limits. But that changes quickly when one of the top salesmen at his office (Thomas Lennon) dies by auto-erotic asphyxiation, and Tim’s boss (Stephen Root, simultaneously paternal and slimy) sends the unprepared rube off to the “big city” of Cedar Rapids to represent the company at an annual insurance convention. Of course, this sets the stage for a lot of laughs, often at the expense of Tim’s own naivete and appalling lack of life experience, but what makes Cedar Rapids click is its willingness to make a departure from that font of humor and foster laughter in a more organic fashion. Sure, the story pokes fun at the Midwestern type it so prominently features in its lead and many of its supporting characters, but it invites us to laugh for the right reasons and not because Tim is so hopelessly out of his element. It sounds cliche, but we’re really laughing with these characters and not at them. Maybe it’s more accurate to say that they’re in on the joke than anything else– “Sure,” they seem to be saying, “we might be tweedy insurance salesmen cutting loose at a convention in Iowa, but why’s that such a bad thing?”

Truthfully, Cedar Rapids more embraces the small-town yokel character archetype than anything else, and that’s a refreshing change. Another movie would have simply used their background to ridicule Tim and his cohorts from start to finish, and it likely would have wound up totally stale and comically inert. Arteta, however, seems to actually like these people and view their quirks for what they are– quirks, character traits, and nothing more. In doing so he seems to be saying that there’s nothing wrong with his characters, that they are who they are, and by adopting this perspective he leaves all of the principles with a lot of room for well-rounded and natural development. Ronald, perhaps more uptight and straight-laced than even Tim, learns to let himself go and have some fun; Dean, a vulgar booze hound who’s bursting with hot air, proves to be a caring, stand-up guy with some real emotion behind his facade. Only Joan doesn’t undergo a massive change, but unlike her male counterparts she doesn’t really have to; she, from the start, knows who she is and has accepted that personal truth. Tim of course undergoes the biggest transformation– he’s still the same small town boy at his core but grown up, and when the climax rolls around we’re genuinely proud of who he’s become in just a few short, inspiring and life-changing days.

They’re also crude, rude, alcohol-soaked and sexed up days. Let’s not forget that next to the film’s heart there’s a pulsing vein of raunchiness that’s equally as much an essential part of the movie’s liveliness. Tim, upon meeting Dean and the others, gets up to the kind of wonderfully crass antics seen in the films of the passengers aboard the Judd Apatow train; Cedar Rapids almost feels like Superbad for middle-aged business geeks and pent-up parents rather than hormone-crazed high school students, which I truly mean in the best way possible. The film never quite reaches the same heights of adolescent wackiness as the comedies to which it naturally compares, but it doesn’t need to and in fact if at any point it did, the end product may have been marred, but Arteta, shrewdly, lets his grown up professionals have fun without cribbing too much and too blatantly from the younger comedic set.

Ed Helms may be an obvious choice for the role of Tim Lippe, but obvious or not he works perfectly as the film’s lead. Tim’s personality demands gawky innocence; he has to be totally unaware of the social mores of the world outside of his hometown and at the same time he needs to be recognizably human enough for the audience to buy his eventual turnaround. Helms possesses both of those qualities in spades, and of course it doesn’t hurt that he’s incredibly funny and adept at milking punchlines for all they’re worth. Helms is the film’s clear winner; while his career certainly shouldn’t be dismissed, he’s most notable for playing a support part on the ailing US Office and in Todd Philips’ The Hangover. Cedar Rapids isn’t destined to be a mainstream, commercial monstrosity like the latter film, but the extra exposure certainly can only boost his career trajectory if there’s any justice in the world. He’s great here– not just as a comedian, but as an actor, too– and he deserves to be seen.

Not that the rest of the cast slacks off; John C. Reilly brings his reliably boisterous personality to his character while Heche proves sweet, sensual, and as capable of making jokes about hot dogs and orifices work as her male counterparts. Whitlock, for my money, steals the movie with a truly devastating Omar Little impression that leaves all present awestruck and speechless (for those not well versed in The Wire, don’t worry, you’ll know it when you see it), and if I have one complaint its that Ronald Wilkes doesn’t get nearly enough screen time with the rest of the gang. Whitlock doesn’t get around nearly as much as he deserves.

Cedar Rapids is a minor film for Arteta, Reilly, and Heche, and a pretty big movie for Helms. (Hell, it could be a pretty big movie for Whitlock, too. Clay Davis doesn’t really get a whole lot of face time these days.) That by no means should reflect negatively on the picture’s quality; it’s a bit insular, and definitely on the same small, personal scale as many successful contemporary comedies, but given the movie’s small-town proclivities and locations that minimized scope makes a great deal of sense. It strikes me, most of all, that a story that takes place in an adult world can involve so much growing up; that frequently comes up in modern comedies focusing on the younger set, and seeing it so prominently featured here is a welcome surprise. It’s elements like that– the smart, unexpected choices– that help make Cedar Rapids such a strong showing for Arteta and his cast, and a great way to start off the new year.