Driving home from work the other day, I plugged my iPod into my tape adapter (you read me right) and slowly cycled through the albums stored on that most ingenious (and simultaneously nefarious) of inventions, painstakingly considering each record in an effort to pick out which album made the most sense as the soundtrack for today’s egress from the office. After going back and forth between The White Album and Somewhere In the Between, I realized that I needed to go off the rock-and-roll beaten path and listen to some rap; having come to this conclusion I put on Cannibal Ox’s iconic underground rap debut, The Cold Vein, and started motoring onward toward my house.

The first track’s gritty, space-age sonic sensibilities dredged up a disjointed stream of conscious that ranged from regret that the rap duo never made another album to curiosity in regards to what both MCs are up to these days. (A quick trip to Google, I knew, would be one of my first tasks as soon as I made it home.) It also made me think about what makes The Cold Vein, alternately a love note to New York and a bitter condemnation of it, so special to me and why I can still listen to it as an adult and still find it moving (in every sense of the word) and engaging. The latter question had an easy answer; it’s just an outstanding album by any standards, no ifs, ands, or buts. But it took me a moment or two to reach consensus on the former query. Thinking back, I remembered who introduced me to Cannibal Ox and funneled the sounds of The Cold Vein into my ears in the first place– friends, old friends, from a very particular and formative time of my life– and my attachment to the album made sense. It’s not just that The Cold Vein is great; it’s that it’s one of the earliest rap albums that I can recall that fueled my interest in the genre and broadened my musical horizons. I went from being a disciple of the head-spinningly impossible riffs and solos of Dimebag Darrel and the cruel jazz of Paige Hamilton to scouring record stores for the most talked about indie rap of the day. Oh, I never stopped being a fan of Pantera, but now I had room in my heart for the MCs, too. And that eventually rekindled my love for jazz and the blues. And and and.

I know you’re wondering, at this point, what the hell this has to do with movies. Don’t worry, I did too.

A lot of us out in the blogosphere try, fruitlessly, to nail down our “top ten” as a means of introducing our tastes and cinematic proclivities to readers who are new to our respective sites and, frankly, deserve to have some kind of warning in regards to what they’re getting themselves into. (If someone has Ichi the Killer as their number one film, run.) And before the thought enters your mind I’m not at all attempting, and nor will I attempt, to discourage such activities; if anything else top tens serve as a means of recording our tastes in a given moment in time, because I guarantee that for many, those lists will change with the passage of even just a year. Those who have been reading Andrew At the Cinema know that my own list changed, albeit not particularly drastically– but in fact within that 12-month period. I’m not saying that taste is fleeting, but our feelings toward individual movies ebb and flow and eventually change the farther we get from them or the more that we watch them. Read my own list, and you’ll see that this is true of my #1 movie, Oldboy, a movie I initially didn’t much care for and eventually came to revere. Conversely, I used to love, love, love The Boondock Saints and have now come to loathe that film with the sort of passion usually reserved for crooked politicians and heartless, self-interested business bigwigs.

My point, ultimately, is that the things we deem “favorite” can change as we watch more movies and as time passes and we move away from the movies that we already know. What will never change are the films that actually mean something to us as cineastes. Just like The Cold Vein will always be a critical rap album as it concerns my own personal connection to the genre, there are specific movies out there that directly informed my attitudes about film and helped encourage and fuel my interest in the art form– and while tastes can change, the movies that shape our passion for movies are permanent.

So with all of this in mind, readers, I bring to you the first installment in an ongoing series covering my milestones, turning points, epiphanies, and developments as a cineaste. And we’ll kick things off with… 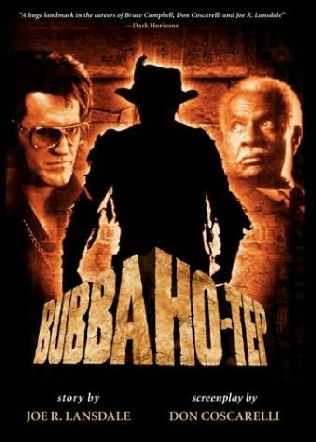 Back in 2003, I, a sophomore in college and budding film enthusiast, made a little road trip from my temporary base in Baltimore to New York for one purpose and one purpose only: to catch the premiere of Bubba Ho-Tep at NYC’s Angelika Film Center. I tell a lie, though, since I had to have dual purposes in order to justify the trip in the first place, because who drives four hours to see a movie? By happy fortune the film’s opening coincided with Rosh Hashanah that year, and while I felt a bit of a heel for using the Jewish New Year as an excuse to go see Elvis fight an ancient Egyptian ghoul with a fondness for cowboy apparel, I nevertheless drove to New Jersey for the weekend to celebrate the High Holiday with my friend and his family before he and I made our way to West Houston street to see a sure-to-be-awesome movie before anyone else.

Grant that to me, a movie like Bubba Ho-Tep hardly qualified as JUST a movie. Don Coscarelli (the man behind the Phantasm series) knows his way around a genre picture, and in choosing to adapt Joe R. Landsdale’s inspired novella about a decrepit nursing home being menaced by a soul-sucking mummy decked out in cowboy boots and a Stetson, he picked a movie that not only suited his sensibilities as a director but also those of his star. Bruce Campbell isn’t called the king of B-movies for nothing, after all, and a comedy-horror movie that pits Elvis against a mummy falls right into his wheelhouse as a reigning icon in genre filmmaking. (Let’s be honest– movie geeks, as a rule, go a little ga-ga over any project that features the Chin in any capacity. He’s not just the king of B-movies, he’s the king of the geeks. Hail to the king, baby.) And while I may never understand what impelled Ossie Davis, a cinema legend instrumental in altering the perceptions of black actors and filmmakers and a significant member of the Civil Rights movement, to sign onto a project that had him cast as a man claiming to be JFK, his presence nonetheless added a certain je ne sais quoi, an ineffable gravity and weight, to what could be reduced to a silly genre picture.

Fold all of these elements together, and voila, you have an event and not just a movie. Maybe stacked against the biggest geek event movies of the last decade– say, the LOTR trilogy or the Star Wars prequels– a smaller, independent movie like Bubba Ho-Tep doesn’t quite measure up in scope and reach, but then again it doesn’t really have to. Everyone can go to their local multiplex to see the LOTRs or the Avatars. Not everyone gets the opportunity to see a movie like Bubba Ho-Tep in theaters, and for those who do the experience of attending screenings for films of its kind are made all the more special by their inherent scarceness.

I can say that for me the initial pleasure in making Bubba Ho-Tep’s premiere lay primarily in seeing the actual movie for my own personal gratification and less in seeing it for the purpose of holding the experience over my friends’ heads. (Not that I didn’t do a bit of that, but hey, nobody’s perfect.) But you can probably guess that I got more out of that fateful journey to the Angelika than I’d anticipated at the time, or else I wouldn’t be writing about a movie that I still consider to be a pretty great and highly underrated movie. Put bluntly, I don’t think I could ever relinquish the experience of hitting the road on a quest to see the movie on opening weekend. There’s something about making that pilgrimage to the Angelika that led to a minor cinematic catharsis; I knew, driving in my friend’s compact car, that my love for cinema wasn’t a phase in my life, something I was trying on for size to see if it fit. I was a bona fide film enthusiast, because no casual moviegoer drives for a four hour trip to see an obscure genre movie– even one starring Bruce Campbell and Ossie Davis. When I told people that I was a film buff in the making, I wasn’t tooting my horn or blowing smoke, and I had a genuine and personal story to demonstrate as much. For all the movies I’d seen and been excited about up to that point, Bubba Ho-Tep was the one that in my mind solidified my cinematic identity.

And the people! Look, I’m not going to paint a picture of the scene at the Angelika as one made up of refined, high-minded cineastes– you can probably imagine the general audience without me describing the overall attire as “metal concert” or estimating that there were more body piercings and tattoos in total than actual people present. And that I’d probably never normally connect with most of the attendees on any level beyond our shared love for B-movies. But what can I say? I felt connected to the crowd nonetheless, because we were all there for the same reason: to watch Bruce Campbell pretend to be Elvis while grappling with the wild West’s very own version of King Tut. (And to see Ossie Davis drop some pretty amazing one-liners. If I had a top ten list for those, “I’m thinkin’ with sand, here!” would definitely land in the top three.) It didn’t matter that I’d never see any of these people again or that in everyday circumstances I might not even talk to them. Once we were all in the theater, we were all just fans and geeks sharing in the movie-watching experience, and that was all that was important.

Years later Bubba Ho-Tep doesn’t even land in my top 25 films of the 2000s, much less my personal top ten (though if you haven’t seen it, I strongly recommend it for any B-movie/genre fan). I’ve watched better movies since then, and I’ll watch even more in the years to come, but to this day I’ve never gone out of my way to see any movie more than I did for Bubba Ho-Tep. While the movie itself didn’t contribute to my continued interest in the art form, the total experience was undoubtedly an essential element in invigorating my passion for cinema. And to think that the entire time I thought I was just going to watch a delightfully wacky B-horror comedy about Elvis, JFK, and an ill-tempered mummy.

7 thoughts on “Movies That Matter: Introduction”