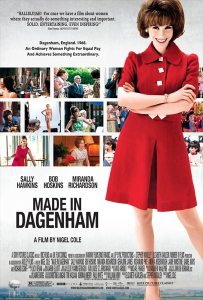 Calling a movie like Made in Dagenham predictable makes me sound incompetent. Of course it’s predictable. It’s based on something that actually happened, the outcome of which I’m well aware. (Titanic was predictable, too. The ship sank at the end! How tragic!) Be that as it may, predictable is exactly what Made in Dagenham is– maybe not so much through the details but rather through the structure and framework of the movie itself. Certainly it’s a challenge to the director of a biopic to introduce stakes and tension so as to instill in audiences doubt that the story will end the way that they know it should end in accordance with how the reality the film apes played out; the filmmaker has to invest us in the story and make us forget that the story we’re watching unfold really occurred.

But what really makes Dagenham predictable lies in the trappings that Nigel Cole brings to the story– spontaneous and impassioned speeches made by both our heroine, Rita O’Grady (Sally Hawkins, endlessly charming and plucky), and Bob Hoskins’ sympathetic and progressively-minded union representative pepper a film in which the main plot points hit at all of the exact times we expect them to. Dagenham is an underdog story of sorts, and it plays out like one; at the same time to disdain the film would almost be unthinkable. Cole’s cast is so damn lovable and wonderful and engaging that any feeling of familiarity one might derive from watching the movie unfold can be easily overlooked.

Dagenham focuses on the 1968 sewing machinists strike at the Dagenham Ford assembly plant, a walkout that was critical for the passing of the Equal Pay Act 1970 and ending discrimination in pay between men and women (though the law went into practice 5 years later). If the theatrical qualities of Cole’s film dampen its realism, then the great effort put into recreating the period more than makes up for it; from hairdos to outfits, Dagenham absolutely nails the time, and in terms of establishing the attitudes of the era that impel O’Grady to go to battle for civil rights, the movie also succeeds admirably. We’re talking about a time when it was expected of a working woman to not only hold down a job but also manage care of her household and her children, all while her husband lazed about in the manner of a lion, and as Cole adroitly builds up the world of 1960’s England he makes the struggle of the assembly plant workers much more palatable.

It’s a shame, then, that his world-building is coupled with what can very easily be called a standard narrative structure that frankly does little for the story or the plot. Cole delves into the personal lives of his characters to portray the widespread impact the womens’ strike had not just on their gender but on their male counterparts, as well as their own husbands; these are things we need to see, but we don’t need a subplot involving strife between Rita and her husband, Edie, that verges on the melodramatic and ultimately resolves itself far too neatly. It’s trite and unnecessary; something extra but not something essential to the emotional weight of the story. At least we’re spared the rigors of enduring overly impassioned speeches whose sheer elegance betray the characters delivering them; any such moments are played off very quietly and without much fanfare, which appropriately makes them feel much, much more real.

But then we come back to the cast and the film’s sense of humor and inherent charm, and any such gripes feel totally moot. Dagenham is a real pleasure to sit through, all told; Cole finds plenty of time to be cheeky with quick-witted comedic beats, interspersed throughout the movie as the women fight for their equality. A movie like Dagenham, to me, recalls North Country, a humorless and dour affair by comparison, and arguably rightly so in light of the subject matter. But in adopting such a severe disposition, the latter film feels inert and completely tired. Cole, on the other hand, energizes almost every frame of his movie; we’re not being told to take the material any less seriously but the characters still manage to find time for a laugh or two regardless of the gravity of their situation or the necessity of their cause.

If there’s only one good reason for seeing Dagenham, it’s the cast, and primarily it’s Sally Hawkins. If you’re like me you might remember last seeing Hawkins get shot in the face in 2004’s Layer Cake (she also appeared, briefly, in 2009’s An Education), and regardless of whether you do or do not you’ll be happy to know that she fares better here than in that former picture, both in terms of her character’s fate and the type of character she gets to play. Rita O’Grady is a reluctant heroine who gradually comes to fill her role as both a woman– homemaker, wife, sewing machinist, mother– and as an activist. As played by Hawkins, she’s indefatigable; if the movie at any point cared to argue in favor of the losing side of the argument (not that is should have), then any remarks made toward that side of the conversation would immediately have been quashed merely by O’Grady’s nature. Why should someone who toils so endlessly in life ever be seen as lesser by society at large? Hawkins gives O’Grady the kind of heart that the character deserves, and in fact needs, and keeps her totally human and relatable. Backing up Hawkins are Bob Hoskins, who’s almost never been warmer and more kindly in his entire career, as the union representative who goes to bat for O’Grady and the sewing machinists, Rosamund Pike as the wife of one of Ford’s UK bigwigs, and superbly commanding and disgruntled Miranda Richardson as Secretary of State Barbara Castle.

Dagenham may not showcase the most sophisticated storytelling you’ll see in a movie this year, but what it lacks in refinement it makes up for in sheer entertainment and emotion and some really top-notch acting by a company of excellent British actors. And maybe the stock narrative elements are made up for by the film’s humor; it’s refreshing to see a cause-oriented film promote such an element despite the gravity of the subject being depicted. It’s unfortunate that as a late-season, middlebrow entry, Dagenham is most likely fated to be forgotten, as Hawkins certainly deserves to be recognized for her work here, but perhaps we’ll look back on the film years from now as a big moment in her career.