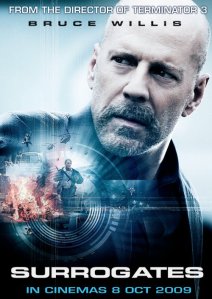 We live in an age where communication comes as easily through a computer as through personal and real human interaction. This is a time when friends are made through online gaming, couples are born from Internet dating services, and everybody– quite literally everybody, from high profile celebrities to your boring neighbors– has a Twitter account and/or a Facebook profile with which to track the comings and goings of their lives. One barely has a need to go outside of their house to “interact” with another human being, though of course any connections forged through these Internet relationships are, arguably, superficial and unstable at best and emotionally unhealthy at worst.

Which is to say that a film like Surrogates, which presupposes that in the future humans will only network with one another through the use of faux-Replicant inventions of the same name, feels incredibly relevant to our present circumstances. At its heart, Surrogates is the kind of idea-based, hard science fiction that should have great impact on social consciousness but simply doesn’t because the mainstream doesn’t care to see it; but that’s just the heart of the story, and every other aspect of the film is completely rotten for all of the good intentions of its basic conceit. Even if anyone bothered to watch this film during its theatrical run (and box office sales prove that at least nobody in the US did, even if overseas the movie fared better), Jonathan Mostow never bothers to explore the questions posed by the set-up and instead uses the concepts of the story– derived from an allegedly superior graphic novel of the same name– as an excuse to stage action sequences that at best could be called amateur.

FBI Agent Tom Greer (Bruce Willis) and his partner Jennifer Peters (Radha Mitchell) are dispatched to investigate a crime scene involving the destruction of two surrogates. Harming a surrogate, we’re told, leaves no injury on its operator; when the agents discover the corpses of the controllers of the disabled surrogates, this statement naturally becomes a little less credible. The agents thrillingly race against time to discover the person behind the killings and perhaps also uncover a vast conspiracy and a game of cloak-and-dagger being played by the shadowy corporation behind the mass production of surrogates as well as the reluctant creator of the technology (James Cromwell).

In between the enormously trite over-arching plot, Surrogates very half-heartedly engages its brain to meditate on what negative effects surrogacy might confer upon a society– Greer feels isolated from his wife, whom he never sees, even in the safety of their own home– but never too long because the script simply doesn’t have the capacity to process the impact of such a technological advance. Who are we really interacting with when we speak with a surrogate? How can you be truly close to someone when your only interactions take place through the protection of a false identity? These queries are presented (as well as others), but Surrogates never does more than scratch its head bemusedly before blowing something up and seemingly forgetting all about these questions. At least they’re asked in the first place, but the utter lack of follow-up to each of them makes their inclusion feel completely perfunctory; yes, humanity might be radically impacted by surrogacy overall, but who cares? To the film’s credit, heavy mention is made of a nation-wide movement that opposes surrogacy; unfortunately Mostow’s vision limits the members of this culture to backwater rednecks and street thugs, and so another layer of the film is left to hang out completely limp.

Maybe all of this would be tolerable if those same explosions were delivered with any sort of verve or given any sense of immediacy; at least then, Surrogates would be an entertaining and lowbrow rendition of a high concept property. But if you’ve seen any science fiction action movie prior to Surrogates— from The Matrix to the Terminator films– then you’ve seen everything that this film has to offer, done much better and supported by more palatable narratives. Everything here feels not just retreaded, but completely arid and devoid of any kind of artistic energy. Maybe that lifelessness is a clever nod to the decidedly inhuman and lifeless nature of the titular machines, but that’s almost certainly wishful thinking and I, frankly, am simply unwilling to let the film off that easily (as should we all).

Surrogates could have delivered either as an entertainment or made good on its intellectual and social potential and been a modest success. That it completely botches both sides of its story is nothing short of baffling. What’s worse, there’s nothing in the human presence in the film to make up for where it is lacking. Why bother hiring a glum, lugubrious Bruce Willis? Greer feels so weighed down by the burden of his own disconnection from his wife (spurred by the loss of their child) that it becomes intolerable; it’s hard not to think about how much more the proceedings would have sizzled were we following the gruff and rough around the edges Willis that we all know and love (because let’s face it, if you love Willis, you love him for his grouchy temperament). Radha Mitchell, meanwhile, reaches levels of unearthly dullness; in this respect Mostow almost deserves to be praised for drowning the life out of such a lively and complex performer.

Finally, Surrogates shoe-horns James Cromwell into the same role he played in the less miserable adaptation of I, Robot more than half a decade ago. Cromwell’s a reliable and authoritative actor, which makes his presence in this film and in this particular role depressing. Is this what he’s been reduced to? Playing the jaded creator of a world-altering technology in bad science fiction films?

It’s not hard for me to dislike a film and criticize its shortcomings. In that regard, Surrogates should be awarded some kind of Olympic medal of awfulness, because it’s almost impossible to maintain a scholarly bent in discussing it. In no uncertain terms, I loathed this movie; Surrogates is a complete and utter unmitigated disaster, the kind of film that should go straight to DVD but somehow manages to worm its way into theaters long enough to potentially change popular perception of what a science fiction film can be. In the World of Warcraft era, a film with concerns such as Surrogates‘ should be impossible to screw up and yet somehow Mostow found a way.