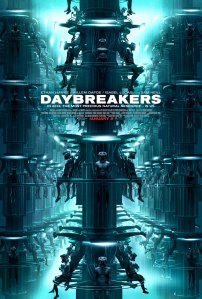 2003 brought us the campy Australian horror comedy, Undead, a refreshing take on the zombie genre courtesy of Michael and Peter Spierig. The film’s low budget and B-movie sensibilities lent it a certain scrappy charm; combined with the interesting perspective the siblings brought to the story, Undead became something of a cult favorite. All of this made the news that their next picture, Daybreakers— also firmly entrenched in genre filmmaking– would have a substantially enhanced budget and a strong cast of actors (including but not limited to Ethan Hawke and Sam Neil) pretty exciting. After all, seeing artists working firmly on an indie-level get brought to the next stage of their careers can only be a good thing, even if the film ends up being a mixed bag– which describes Daybreakers perfectly.

Daybreakers isn’t a bad film by any means. When Twilight‘s glitter vampires define the iconic movie monster in contemporary cinema, the Spierig’s vision for our favorite blood-sucking creatures of the night feels incredibly fresh, and the amount of effort that they’ve put into building up the world in which their characters exist is impressive to say the least. Where the film falters lies in the climax; Daybreakers ends on two completely incongruous notes, as though the brothers couldn’t decide how they wanted to finish off their story. This doesn’t have the effect of ruining the film, but dolloped on top of the film’s other flaws it does help drag it down quite a bit and keeping it from becoming the genre classic it could have been.

It’s 2019 and a contagion has turned most of the world’s population into vampires. As we learn, blood is in short supply as companies like Bromley Marks scramble to find a substitute for hemoglobin while their blood farms (in which humans are kept alive in order to be, over time, exsanguinated) slowly begin to dry up. The need for blood goes beyond mere sustenance; we learn that if vampires don’t ingest blood on a regular enough basis, they turn into feral, bat-like beasts called subsiders. Edward (Hawke) is at the forefront of the search for a solution, but with the bleeding heart of a moral activist, Edward would rather find a cure for vampirism than a replacement for human blood (which he’s secretly stopped drinking), though unsurprisingly he’s in the minority as far as that option is concerned.

Daybreaker‘s greatest strengths lie in the sheer detail and thought that the Spierigs put into building their vision of a vampire-infested future for Earth. I think that people tend to find monsters like vampires compelling because, in short, they’re us; they’re reflections of our baser instincts, and the great vampire stories generally acknowledge this in some fashion or another. (Hell, even the Twilight movies could be interpreted as a teenage boy’s struggle to suppress his sexual urges.) The Spierigs take this point quite literally. Post-contagion Earth looks really familiar in terms of the routines that its inhabitants keep, the way that they dress, their consumerist behaviors. In a movie that features images of humans having their life literally drained out of them in a prolonged and torturous fashion, the most horrifying idea present may well be that in the face of a world-changing event that completely upends the way that people live, they barely miss a beat. They still shuffle off to work on crowded subways; they still line up to purchase that early morning cup of coffee to get them going before they head to the office. Their coffee gets spiked with blood, of course, but there’s something inherently disturbing in how humanity just trundles on in the wake of its own destruction. It’s in these moments that Daybreakers is at its best, and where the Spierigs clearly put the bulk of their efforts in imagining their world.

Eventually, Edward saves a group of humans from being discovered by vampires (who would subsequently send them the pharmaceutical companies to be processed); he teams up with them upon learning that they may have found a way to cure the vampire curse. It’s at this point that Daybreakers slowly and over time ceases to be a piece of social commentary and focuses much more on propelling the plot forward through action; it makes things no less entertaining but as soon as the allegory stops, the film does become somewhat less interesting. What really causes Daybreakers to drop off is the obvious lack of certainty over where to go with the story’s violent, incredibly bloody climax; is this meant to be a tragic scene of loss and destruction, or should we walk away from the movie holding onto the message of hope inherent in the finale? None of this will really matter to the gorehounds, but it does take quite a bit away from a film filled with rich subtext and symbolic representation.

While the film falters in ending, the rest is solid and all of it is held up by pretty great core performances. Hawke does what he’s good at here; it’s nothing new, but that sort of muted brooding works for Edward. Sam Neil really steals the entire film as the antagonist, an oily and coolly malicious villain who Neil clearly delighted in bringing to life. Bromley’s a great stand-in for the greedy corporate suits who have brought so much ruin upon the American population through their own avarice and unethical behaviors; he doesn’t care about curing vampires or even finding a blood replacement for the sake of the people, but rather for the sake of a tidy profit. Neil connects with this character’s heart and really runs with it, turning out one of those precious performances wherein a seasoned and talented actor brings gravitas to the camp taking place around them.

Had the Spierigs come up with a clearer path to bringing Daybreakers to a close, it would have been a much stronger film. As it is, it’s a solid little genre film with a muddled denouement that holds the film back but doesn’t detract from the frequently wonderful moments preceding it or undo any of the veiled political allusions woven throughout the narrative. If nothing else Daybreakers should more clearly identify, to a larger audience, the Spierigs as energetic and exciting filmmakers with plenty of new ideas to bring to tired and worn out genres. With a judicious editing of their scripts, they should be more than capable of contributing a real classic to genre filmmaking before long– in the end, that sort of discerning eye is all that Daybreakers would have needed to tighten up and work as a much more economical film.