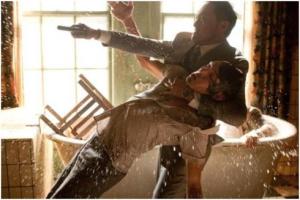 Inception, in its fashion, feels well-worn and familiar but only because the trick of the film is a favorite of director Chris Nolan’s. Indeed, he pulled it off just two years ago with 2008’s The Dark Knight, a sincere if bloated attempt at inciting a mainstream cultural phenomenon framed within an equally genuine bid at creating an important and moving piece of cinema. Put simply, Inception is the continuation of that pop filmmaking experiment, and this time the results can only be called wholly magnificent, breathtaking, and astounding. For many, the film presents an heir to the throne long held by 1999’s The Matrix as an intelligent and concept-focused piece of science fiction action euphoria, and the comparison is apt if somewhat inaccurate (the latter film supports its action with ideas, while the former chooses the opposite route). Regardless, Inception certainly appears to be the kind of game-changing pop cinema that comes along only a handful times in a given period; perhaps more than that, it’s the film that Nolan appears to have been working towards for his entire career, not just by virtue of the staggering accomplishment it represents but also in the way that the film appears to grant us insight into Nolan’s process as a filmmaker.

Inception focuses on Dom Cobb (Leonardo DiCaprio), a thief expert in the ways of extraction– a process through which one enters the dreams of another to steal secrets from their subconscious. Not long after the film’s dream-layered introduction, Japanese business magnate Saito (Ken Watanabe) offers Cobb a task which demands the performance of an inception, wherein an idea is transplanted rather than excised from the mind of the target. Saito wishes to engineer the destruction of the energy empire founded by a dying man named Fischer (Pete Postlethwaite) by leading his son (Cillian Murphy) to choose to dissolve the company through application the aforementioned dream chicanery. Oh, what a tangled web of deceit.

Cobb, like any good thief, assembles a team of fellow thieves for assistance that includes but isn’t limited to Joseph Gordon-Levitt, Tom Hardy, and Ellen Page– at which point an exciting caper film commences as the team enters the mind of Fischer Jr. to carry out their plot. And taken at face value, Inception works marvelously as a mind-bending crime drama. But Inception‘s true worth lies in how much rich subtext exists for viewers to analyze and the myriad ways that the film can be interpreted. Writing at length about the number of conclusions made about both the film and its thoroughly-discussed ending would be improper in a formal review– perhaps a full-blown discussion of the film is in order?*– so suffice to say that Inception may well be the first  film of the year that incites and fosters the level of intricate analysis being brought to bear in dissecting the film’s innumerable layers. Arguably Nolan has only made a very heightened and unique heist movie; that one can potentially plumb so much more from the nuts and bolts of the film speaks volumes to what he’s accomplished in total through his work here.

What can be mused over without ruining the movie for others is the film’s central metaphor for how Nolan makes films. Inception almost feels autobiographical, a clear-cut mirror to the process Nolan uses when he creates movies. Nolan himself has gone on record drawing connections between how Cobb and his team go about creating a dream for their chosen mark and how Nolan and his film crews conjure the worlds that they capture through the eye of the camera. Keeping his commentary in mind the parallels between the characters of Inception and the staple members of a film crew become visible quite quickly. Like any filmmaker, Cobb takes his target/audience, Fischer, on a journey through a constructed narrative and world of his own design. Of course Cobb, unlike Nolan, is perpetrating a crime rather than creating art, but undoubtedly the shared dreaming of Inception is no more or less real than the films that we all watch and love to discuss and could be considered comparable. Just as Nolan presents us with his personal vision as we sit riveted in a theater watching the plot unfold, so too does Cobb keep Fischer engaged through his own efforts as a storyteller.

In this respect, Inception shares a closer kinship with films like Fellini’s classic surrealist picture, 8 & 1/2 (perhaps the greatest movie ever made about making movies), and 2009’s Inglourious Basterds. The latter film could even serve as an effective companion piece, though the two contemporary movies are interested in different things– Basterds is more concerned with depicting the ways in which cinema can impact entire cultures and populations while Inception cares far more about how movies can compel and inspire and effect change in an individual–  despite sharing the same heart.

My film-school pretensions aside, Inception works as a complete picture and not just a rich text for us to read and interpret. Once the pieces are in place and Cobb and his team are ready to perform their deception, the film heists with the best of them, and maybe even better than some. That said, I cannot ever remember seeing a crime caper unfold across multiple dreamscapes– so perhaps those other films are at a disadvantage in a direct comparison. Inception is engrossing and exciting; Nolan has figured out how to better stage action sequences and the chase scenes and fights of the film sizzle with energy and intensity. It’s in these moments that the film truly earns the comparisons to The Matrix, particularly in a bravura fight sequence between Joseph Gordon-Levitt and security guards that takes place in zero gravity. But Inception also has common lineage with classic crime dramas such as Michael Mann’s 1995 Heat with its tightly cut shootouts and even the James Bond franchise with its espionage and intrigue; though the style is undoubtedly Nolan’s the shared ancestry is there.

But the action– good though it may be– isn’t what anyone should be concerning themselves with. (At least not primarily.) Nolan’s real achievements here lie in his world-building; he has nestled worlds within worlds that mimic our own but defy our preconceptions about what each should look like and how they should behave. As the film delves deeper and deeper into the realms of the subconscious the worlds grow more and more extravagant, ending in the so-called “limbo” of the Inception universe where massive decaying buildings litter a shoreline for as far as the eye can see. It’s the depth of Nolan’s vision combined with his perceived willingness to yield insight into who he is as an artist that makes this film such a triumph. Few directors working today have that blend of crystalline perspective and pure skill to construct the world that he presents to us here; even fewer care enough to make their souls vulnerable to us by letting their audiences peer into their sense of identity as filmmakers. In a single film, Nolan has ably managed to do both.

But what good does a well-constructed world do without an equally excellent population to inhabit it? Inception gathers together a core of incredibly talented actors, headed by DiCaprio’s somber and focused extractor and supported by the likes of Ellen Page, Joseph Gordon-Levitt, Tom Hardy, Watanabe, and Marion Cotillard. This is a cast propelled by raw charisma, whose compellingly dour lead yields an abundance of space for even the most sparsely written among the supporting players to pop and shine. Of note, Hardy (someone we should all be paying more attention to in light of 2009’s Bronson) and Gordon-Levitt (a young actor who has slowly come into his own since his amazing turn in Rian Johnson’s 2005 neo-noir Brick) come off particularly well, with Page shedding her acerbic wit in favor of wide-eyed uninitiated awe. It’s a smartly assembled lot– there’s a certain pithy shrewdness to the mix of styles here and it works gangbusters. I doubt you’ll see a more interesting cast in another film released this year.

See Inception. See it because even if you find it flawed, even if you find it missing something or perhaps in need of some judicious parsing and cutting, movies of its kind are rare and deserve to be paid attention to. Buy a ticket if you like Nolan; buy one if you don’t. At this point everyone who needs to have seen Inception has, and many of those who should already have it under their belts, but for those who haven’t taken the two hours and change– make the trip. Nolan has created something special and memorable here; perhaps it’s to Inception‘s advantage that the summer season has been such a drag, but this film at any other time of year would have been just as powerful.

*Any of my fellow bloggers out there– I’m looking at you.