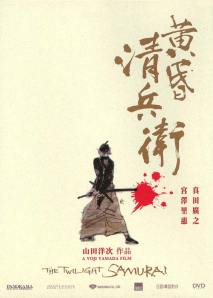 Hiroyuki Sanada may well be the best actor whose name you’ve never heard, but whose face you swear you’ve seen before.

Like countless other Americans I suffer from a crippling addiction to television juggernaut Lost, a show that went from character driven, high-concept science fiction recalling Jules Verne to a nebulous and frustrating series of gimmicks and red herrings. Writing failures aside, Lost has kept an impeccable roster of stars to serve as principals, supporting players, and guests from day one, and the program continues the trend in its final season by introducing its third Deadwood alumnae, the bespectacled John Hawkes, translating for Sanada’s enigmatic Other, Dogen.

Sanada isn’t a stranger to American media; he appeared as samurai warrior Ujio in 2003’s The Last Samurai, a role which required him to grunt at Tom Cruise and, if needed, beat him up, and most recently starred as Jackie Chain’s foster brother in 2007’s Rush Hour 3. Unsurprisingly neither role does more than even hint at the breadth of Sanada’s acting ability, but I hope that his stint on Lost impels curious viewers to delve into his body of work to watch him in the roles that made him so prized in his homeland.

Sanada’s greatest performance, for my money, lies in his role as low-ranking samurai Seibei Iguchi in 2002’s period drama, The Twilight Samurai (which competed with, and lost to, The Barbarian Invasions for Best Foreign Picture in the 2003 Academy Awards). The film finds its setting towards the end of Japan’s Edo period (~1868), and places Sanada in the role of a samurai who spends his days performing inventory of dried fish and grains rather than employ his blade on the battlefield. He looks bedraggled, worn out; Sanada hardly fits into the preconceived notions people might have about Japan’s samurai class from observing cinematic depictions of them. When Seibei hurries home at sunset to care for his daughters and his ailing mother (the Japanese title, Tasogare Seibei, refers to the nickname Seibei’s peers give him for choosing to look after his family rather than carouse with his peers), those traditional ideas about the samurai in cinema further evaporate, and we learn come to understand that Twilight Samurai doesn’t care about glorious, choreographed battles, focusing instead on themes of social standing.

Twilight Samurai follows Seibei’s life as he balances his duties as both a samurai and as the sole caregiver and provider for his family. His wife, at the film’s opening, dies of tuberculosis (and is given a grand funeral in accordance with her standing as a member of a higher samurai family than her husband), leaving Seibei to perform the tasks required of him by his clan and maintain a home for his daughters and mother. He is reunited with an old friend, Tomoe (the sister of one of his fellow samurai), and their reunion triggers a chain reaction of events that serve to display Seibei’s quality as both a member of the samurai class and as a compassionate human being. Through the events of the film, Sanada handles the multi-faceted and complex character of Seibei Iguchi with aplomb, affecting his underlying honor and nobility despite the decidedly ignoble circumstances of his life (namely, that he is derided for choosing to look after his family in favor of spending his nights drinking with his fellow samurai). Sanada portrays Seibei as a man determined to do what is best, rather than what is expected of him, but he always keeps the character tinged with an air of grief (over the loss of his wife) and remorse (over his inability to provide the best life possible for his loved ones due to his low standing in society). At one point, he refuses to propose marriage to Tomoe for this express reason. His humanity and compassion, while not foreign to samurai in film, does much to set Seibei (and by extension, Sanada’s performance) apart from differing representations of the character archetype.

Seibei does, in some ways, meet our expectations of what a cinematic samurai warrior should be; he engages in a duel with Tomoe’s ex-husband, the abusive,

drunken Koda, but arms himself with a non-lethal, wooden sword, and defeats the better-equipped warrior with ease. Towards the film’s climax, Seibei’s clan leaders call upon him to dispatch a rogue samurai (in light of the skill displayed in his fight with Koda), further showcasing the character’s martial ability. Both of these instances of combat prowess, however, exist to underscore Seibei’s desire to avoid bloodshed. His choice of weapon in the first duel acknowledges his understanding that with in-fighting among clan members being explicitly forbidden, the victor would surely perish along with the loser. Furthermore, in approaching the task his superiors assign him, Seibei commiserates with his target, entertaining the disgraced samurai’s wish to recount his own story (which is unnervingly similar to Seibei’s) and flee. The encounter nonetheless ends in violence, an outcome which Seibei views with dissatisfaction, and even regret. But Sanada keeps the character collected and almost unfathomably calm in the face of circumstances many others would crumble beneath; forced by his clan to kill, Seibei loses none of the quiet power and grace that encompass the tragic and dignified figure Sanada establishes and builds upon throughout the story.

I’m writing this piece in promotion of Hiroyuki Sanada, but to write about Twilight Samurai without making mention of the excellent direction would be negligent. In fact, arguably, Twilight Samurai presents a greater triumph for veteran filmmaker Yoji Yamada than it does for the film’s talented star. Yamada has been making movies since the early 60’s, and to date has directed nearly 70 pictures (as far as I’m aware), but more than half of his efforts are B-pictures about a Chaplin-esque figure named Torajirō. This results in the creation of an intriguing dichotomy in his career; certainly Yamada could be called an experienced director, but it took him spending almost three decades creating formula films to break out of his mold and really find his voice as a filmmaker.

Of course, Twilight Samurai is crafted so flawlessly that it’s easy to assume Yamada has been making nothing but films like it his entire life. His reconstruction of an Edo-era feudal village is beautifully rendered with muted colors, bestowing the film with a realism married with subtle, nuanced artistry. Virtually every shot in the film could work as a still image, framed and hung up on a wall for people to observe, and it’s Yamada’s and cinematographer Mutsuo Naganuma’s adherence to simplicity in their approach to filming the picture that makes Seibei’s world feel vibrant without being ostentatious.

In the questions that the film poses, and in the stripped down, de-glamorized way in which it presents its world and its characters, Twilight Samurai stands out as particularly unique in modern interpretations of the samurai. Here, the iconic, noble, honorable warriors are deconstructed and humanized in a way not often seen in cinema (in fact, Seibei harkens back to the time of Kurosawa’s Seven Samurai in perhaps not-unintended ways). More than anything else, it’s these elements that make the film so exciting; Yamada and Sanada both have experiemented with the tropes of the genre to come up with something that feels fresh and timeless. Lost fans eager to see Sanada flex his acting muscles might not necessarily find Twilight Samurai to be their cup of tea, but for inquiring viewers, it’s a fine starting place for learning more about contemporary Japanese cinema.